England unlikely to return from Russia with love

The former Premier League star with his football betting advice 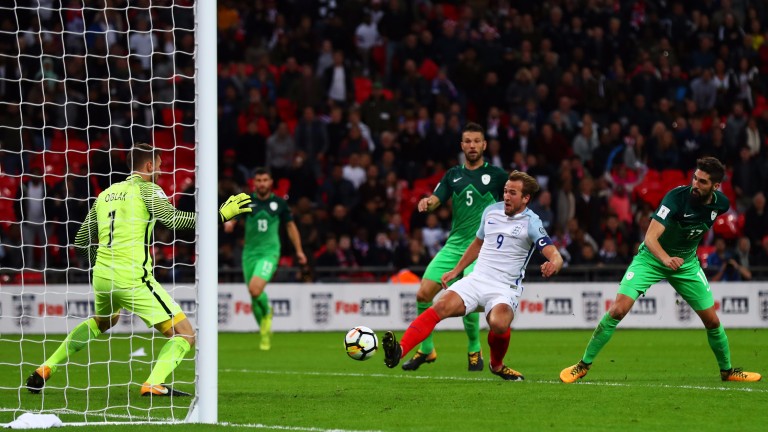 That England have qualified for the World Cup should surprise no one – but anyone who thinks they can go to Russia and compete for the trophy should be in a straitjacket.

Judging by the odds, the usual euphoria isn’t there so maybe England fans are finally getting the message.

Once upon a time when England made it to a World Cup they’d have been backed into around 6-1 or 8-1 – this time they’re a much more realistic price. The penny has finally dropped. Mind you, I wouldn’t touch them at 50-1.

None of this is an overreaction to another dismal night at Wembley where the paper planes were more entertaining than the fare served up by Gareth Southgate’s men against Slovenia.

This is a cold-eyed assessment of a team who are miles away from world class and have been on the way down since the Premier League was born.

The Premier League is a unique competition. It pays astonishing money and offers a different style to other big leagues – that’s why it’s a huge draw for overseas stars. And as they have filled the teamsheets from Arsenal to Watford, better English players get squeezed out.

So Southgate, like his predecessors, has a dwindling resource to pick from – but even those he can select are playing the Premier League way, which is completely different to the tactics and mindsets deployed in the Bundesliga, Serie A or La Liga.

I’ve always maintained that you can call yourself world class if you can make it at the top clubs in Germany or Spain because you will be able to adjust to the international arena. But Premier League players struggle to make that step.

None of this, of course, bothers anyone at the Premier League. They couldn’t care less about the state of the national team, only their product, and it’s a product that continues to flourish.

But it has to bother England fans because it’s only going to get worse. Soon, not only are England not going to be able to compete in tournaments, they might not even be qualifying for them.

Look at the struggles that the likes of Argentina, Holland, the United States and Italy are having merely trying to get to Russia. Smaller countries, supposedly lesser countries, the likes of Peru, Panama and Northern Ireland, have worked out what levels of organisation and discipline are required to punch above their weight. Could England’s defence stifle Lionel Messi the way Peru did on Thursday night? I’m not so sure.

England have a top-class striker in Harry Kane, who would look good in any international side. But then he’s world class and the main man in his club side at Tottenham, so we know he possesses the pedigree.

As for the rest, the likes of Alex Oxlade-Chamberlain, Raheem Sterling, Daniel Sturridge, Jordan Henderson, Adam Lallana and so on, they are all merely cogs in wheels at their clubs where the overseas stars get top billing.

Maybe England need a change in style, a new approach. Forget trying to do what Spain, France or Germany do. England cannot be compared to those countries. So maybe focus on staying tight and organised, go more direct, adapt to the style that brings out the best in a group of players who aren’t world class.

It has worked for Northern Ireland. And are England much better than them?

Scotland can continue their charge

Scotland have done incredibly well getting themselves into a position where they can qualify for the finals and I’m taking them to get the job done in Slovenia.

The Scots know full well that they’ve got to win in Slovenia as their nearest challengers, Slovakia, ought to be able to see off whipping boys Malta at home.

The Slovenes know their race is almost certainly run and while they will want to bow out with a win, I’m taking a buzzing Scotland to complete a phenomenal finish to their campaign by chalking up three points.

Michael O’Neill's side look as though they’ve done more than enough to secure a playoff spot but I can’t imagine them just going through the motions. That doesn’t seem to be his style.

Norway have been a colossal disappointment in this campaign. They lost to Northern Ireland in Belfast and can expect to lose again in Oslo.

Jupp Heynckes is going back to Munich as Bayern’s stop-gap manager but it’s not an appointment that fills me with excitement and it seems he’s only keeping the seat warm for, probably, Julian Nagelsmann.

Nagelsmann has hardly kept it a secret that he fancies the Bayern job and he has certainly done some impressive things at Hoffenheim, none more eyecatching than beating Bayern in the league.

Against that, he has presided over four European ties, suffering back-to-back defeats by Liverpool in the Champions League and Europa League losses at the hands of Braga and Ludogorets. That doesn’t read too well.

Whoever gets the Bayern job knows the problems lie above them, however, because the working relationship between chief executive Karl-Heinz Rummenigge and president Uli Hoeness is now so strained that the tremors are felt further down the chain.

It’s still a great club and one that, naturally, is very close to my heart.

But the running of it at the moment is questionable and it’s why they won’t land a punch in this season’s Champions League, and face the biggest battle for years just winning the Bundesliga.

City have the edge in Manchester domination

I said at the start of the season that this is the season when Manchester dominates London in the Premier League, and I’ve seen nothing to change my view on that.

What has surprised me after seven games is how well United have started. I thought they’d improve – but not this much, or this quickly.

Getting Romelu Lukaku was inspired, giving them a top-class goalscorer at the peak of his powers.

Signing Nemanja Matic was an absolute masterstroke by Jose Mourinho and gives them a balance in midfield that he couldn’t quite find last season.

Are they good enough to win the Premier League? I’d have to say yes, though I’m still sticking with Manchester City – for now.