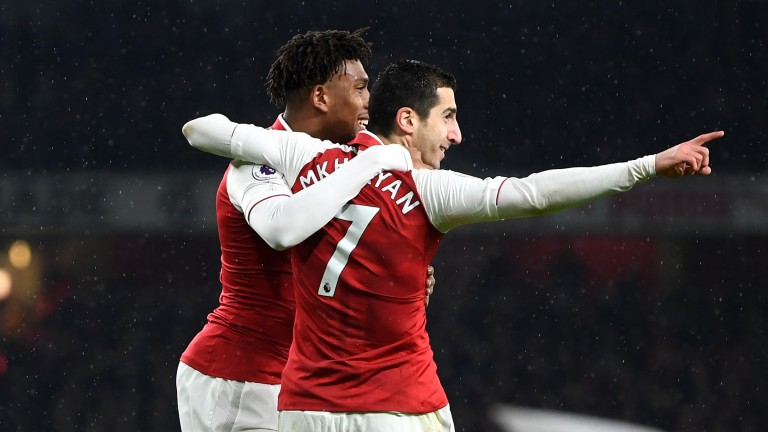 Henrikh Mkhitaryan could be pivotal to Arsenal's chances in Europe
Michael Regan
1 of 1
UPDATED 12:33PM, FEB 10 2018

Swansea to beat Burnley. The Welsh side are resurgent under Carlos Carvalhal and can do no wrong. It’s a remarkable transformation and in stark contrast to Burnley, who have been dipping after their bright start to the season. Last week’s 1-1 draw against Manchester City was a fine effort from the Clarets but they’ve scored only five in their last nine and won’t find it easy at the Liberty.

Manchester City are a very short price at home to Leicester, who have been reborn under Claude Puel. Opposing Man City is never easy but this week of all weeks it could be worth taking that chance. They’ve got a Champions League tie in Basel on Tuesday and one or two key players missing and Leicester are going well.

What has gone wrong for Chelsea this season?

It started with the sale of Nemanja Matic, which I can’t believe Antonio Conte gave his blessing to. Conte has then seen all his big rivals bring in reinforcements and there seem to be trust issues between the manager and the owner. I think Chelsea overachieved last year and now find themselves exactly where they should be in the table.

Who will win the Champions League?

I said PSG at the outset and I’m not changing my mind now. The Champions League is a work-in-progress for the French powers, who have been learning the ropes in recent seasons, improving, spending fortunes and are the best side in Europe at the moment. They have nothing to fear and boast the players to batter anyone – including Real Madrid.

And who do you fancy for the Europa League?

This is made for Arsenal. The Alexis Sanchez saga caused disquiet at the club and with him gone everyone can breathe easily. They looked happier against Everton and the second half of the season is when the Gunners usually come to life. Pierre-Emerick Aubameyang is unavailable but Henrik Mkhitaryan is and the feelgood factor may continue in Europe.

Give us a winner on the midweek coupon

Tottenham or draw double chance at Juventus. I don’t think Juve are anywhere near as good as they were a couple of seasons back and have been surprised by their lack of enterprise in the transfer market. They are still a top-class side but this bet is more about Spurs. They controlled Liverpool last weekend, eclipsed Real and Dortmund in the group stage, and I believe they now know how good they are.