Manchester City should come back stronger after Anfield defeat 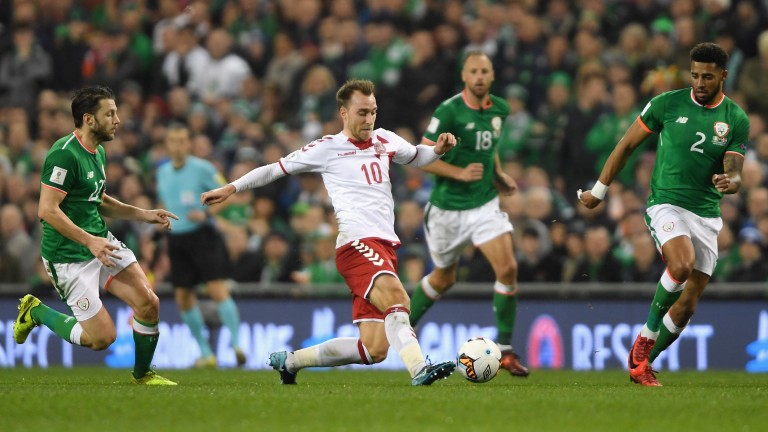 Regardless of what happens in Dublin on Monday night, Mick McCarthy has done an unbelievable job in his second stint in charge of the Ireland team.

My heart says that, having overachieved so far, we can have one more amazing night at the Aviva and Mick can see the rewards of his efforts and get us over the line with a win over Denmark.

My head, however, says something different and I’m worried.

We’ve had two bites at the qualification cherry for Euro 2020 and I was there in Geneva to see us get turned over by the Swiss after what was a really disappointing performance given the prize at stake.

Maybe we should put it down to nerves, but now the players have a second chance to get it right against a very good Danish side.

Everyone saw what Christian Eriksen did to us two years ago in the World Cup playoffs and Denmark remain a strong side, a clever side, with bags of quality.

But Mick deserves so much credit for the fact that we are even in this position. He didn’t inherit very much quality and has restored the spirit and unity which was embedded in the team I played in.

He doesn’t have the greatest reserves of talent to pick from but he’s got them competing on level terms with decent sides such as Switzerland and Denmark.

The group we fought in to qualify for the 2002 World Cup, with Portugal and Holland in it, was probably stronger, but then we had a better group of players. If Mick can get this group to Euro 2020 then it would eclipse what we did all those years ago.

Raheem Sterling spat could have been handled better

England have qualified for the Euros and are looking like a good team, although this week will be remembered for the clash between Joe Gomez and Raheem Sterling as much as the win over Montenegro.

It didn’t need to be that way, though. I’m not sure Gareth Southgate handled the situation between those two players quite as well as he could have.

This wasn’t a major flare-up between Gomez and Sterling, more of a nothing incident in a private room, away from the glare of the cameras and social media.

I agree that Sterling had to be disciplined for his part in the tussle, which was obviously a carry-on from the Liverpool v Man City game the day before.

After all, Gareth has spent a while creating a good atmosphere in the England camp where club and individual rivalries are forgotten and team spirit and harmony mean everything. He had to show his authority and I understand that.

But rather than embarrass those involved I might have been tempted to have kept it in-house. I didn’t see any need to make a big deal of it – if anybody asked, just say Sterling’s got a knock but will be available for the Kosovo game and move on.

Nobody outside the camp would have known anything about it and it would have been forgotten by the players in no time. Everyone moves on.

But it’s become a drama and now Joe Gomez is getting booed at Wembley, which I thought was totally out of order. He’s done nothing wrong in all this yet he is the one who has been turned into the villain.

The whole thing could have been handled differently.

You might think that Gomez and his Liverpool teammates have got one hand on the Premier League title after last week’s outstanding victory over Manchester City, but that’s a dangerous claim to make.

City are a side who tend to bounce back from setbacks by going on unbelievable winning runs and they could make that nine-point lead look fragile if they get going.

Yes, they have issues at the back which need addressing and they need to get to the start of the January transfer window without losing any ground, then perhaps Pep will go in for another centre-back.

It looks as though he might have no choice with Aymeric Laporte sidelined until at least February and Fernandinho being found out. I’m just not sure Nicolas Otamendi and John Stones are good enough.

I’m a big fan of Kalidou Koulibaly at Napoli but then so are a lot of people so he would cost serious money. Maybe Pep should have a look at someone such as Milan Skriniar at Inter, who is winning plaudits.

He’s got to do something because if you’re a City fan you’re thinking this defence isn’t good enough to stay competitive over a busy winter.

Frank Lampard is fantastic but it's still a two-horse race

I still think there will be a title race and it will be between Liverpool and Man City.

What Brendan Rodgers is doing at Leicester is outstanding and the job Frank Lampard is doing at Chelsea is probably even more impressive.

I remember speaking to Frank when Chelsea and Liverpool played the Super Cup in Istanbul and you could hear his concerns. Where were the goals going to come from? Could Mason Mount do for Chelsea what he had done for Derby? Would he miss Antonio Rudiger? But he and his players have answered all those questions and more.

I’m a big fan of Frank and think Chelsea can continue to improve but they aren’t title contenders this season.

Teams such as Chelsea and Leicester could easily go on a run of back-to-back losses, or picking up just a couple of draws in three matches, and that can lose you serious ground given the high standard set by Liverpool and City.