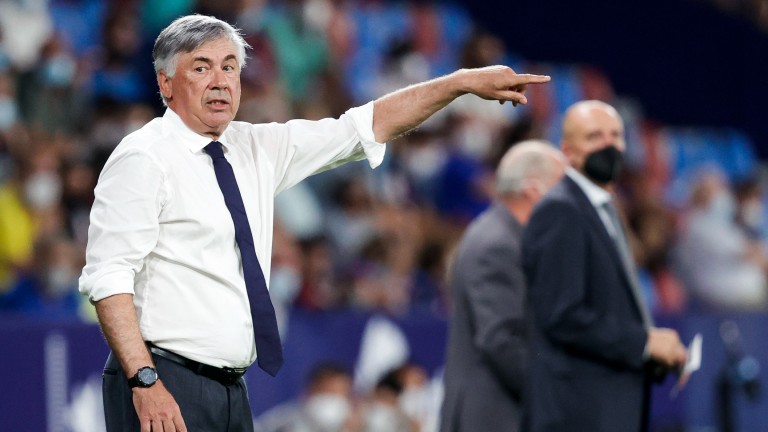 Carlo Ancelotti has his Real Madrid side operating at the top of their game
Soccrates Images
1 of 1
By Liam Flin 3:40PM, DEC 3 2021

Best bets and predictions for the Saturday's matches in the Bundesliga, La Liga and Serie A.

Mighty Madrid may take some stopping

In early November Real Sociedad were the team to beat in La Liga, but less than one month later and the Basque side's title hopes are fading fast.

One win in their last four league fixtures has seen them drop to third and a defeat at the hands of a red-hot Real Madrid side this weekend would surely all but end their title challenge.

And given how Carlo Ancelotti's men are performing right now, an away win looks the most likely outcome in San Sebastian.

Madrid have won their last seven matches in all competitions and they are making light work of a congested schedule.

Ancelotti's squad is in good shape whereas Sociedad will be light in midfield on Saturday with Mikel Merino and David Silva both set to miss out.

The hosts are also struggling to juggle domestic duties with a challenging Europa League section and Madrid can show why some bookmakers have trimmed them to 1-3 for the La Liga title.

Inter are another European heavyweight putting their title aspirations on the line on Saturday when they travel to the Stadio Olimpico to face Jose Mourinho's Roma.

A pulsating 3-2 victory over their biggest title rivals Napoli has sparked a four-match winning sequence for Inter, who are now only two points off top spot as they seek to defend the Scudetto.

Roma, meanwhile, have not looked right since being dismantled 6-1 by Norway's Bodo/Glimt in the Europa Conference League and have lost three of their last five league matches. The Wolves will also be without influential captain Lorenzo Pellegrini for the visit of the champions.

They are still in contention for a European berth but trail Inter by nine points in the Serie A standings and that gap could grow even wider in the Italian capital.

A frenetic 6-3 win over Greuther Furth last time out moved Hoffenheim to within two points of the Champions League places in the Bundesliga and their superb run is unlikely to be halted by Eintracht Frankfurt.

That victory was Hoffenheim's fourth in five matches in all competitions and they saw off Leipzig in their last home assignment as part of that run.

Oliver Glasner, meanwhile, is finding life at Frankfurt tough with the club in the lower reaches of the Bundesliga standings with only four league wins to their name this term.

They have seen an upturn in results recently but beating Hoffenheim, who are fully focused on their European pursuit, could prove a bridge too far.

This weekend also sees the first Der Klassiker encounter of the Bundesliga season with Borussia Dortmund and Bayern Munich clashing at the Signal Iduna Park.

Only one point separates the pacesetters heading into this game and both have their primary marksmen available with Ballon d'Or runner-up Robert Lewandowski and Norwegian starlet Erling Haaland set to lock horns.