Sarries solid but final could be slow-burner

Belief key as champions look to retain their crown 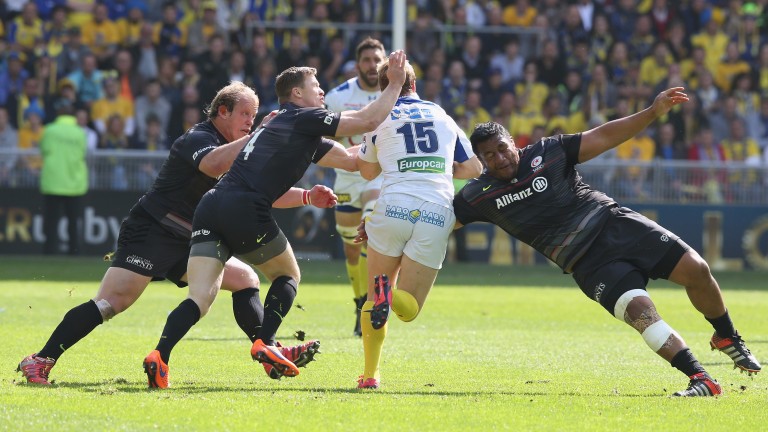 Saracens will look to their solid defence to keep Clermont in check
David Rogers
1 of 1
By Graham Woods 8:00PM, MAY 12 2017

Clermont were the last team to beat Saracens in European competition and have won five of the seven meetings between the teams, yet they are chalked up as 2-1 underdogs to triumph as the sides meet in the European Champions Cup final.

The reasons why defending champions Sarries are just 1-2 to seal back-to-back European titles have been outlined throughout the weeks leading up to the tournament showpiece.

Saracens’ winning qualities have been highlighted by pundits and analysts - they are well-coached and well-drilled, they play a highly structured game which they execute with precision, and they are supremely hard to break down.

The key words are trust and belief - not only do they have a system in place to win games, they know that they can make the system work.

Clermont winger David Strettle, a former Saracen, has said this week that if his side are at their best they can win. But that is the point. Clermont will have to do something extraordinary to win, Saracens believe they just have to do what they have been doing all season.

True, Sarries didn’t finish top of the Premiership table, but why was director of rugby Mark McCall prepared to rest key players for last week’s final-round match at Wasps when a win could have given them top spot? Because he believes his players are good enough to win an away semi-final at Exeter, and he knows they believe that too.

Clermont were Racing Post Sport’s ante-post selection for European glory at 8-1 and although they have been beset by injuries, they are not without hope - and they can take confidence from their record against the English side.

But there will also be memories of a 46-6 mauling in the 2014 semi-final at Twickenham, where Saracens were dominant from start to finish.

Clermont cannot afford to be left behind and will look for a similar start to their semi-final against Leinster, when they were 15-0 up within as many minutes.

Indeed, the French side have been the fastest starters in Europe this season, scoring 16 tries in the first half, more than any other team. But Saracens’ record is perhaps even more telling - they have not conceded a first-half try in the competition this season.

Anticipating a cagey, low-scoring start to this clash then looks the best betting approach and there is plenty of evidence that this could be a slow-burner.

Although Clermont got off to a flyer in their semi-final, their quarter-final against Toulon was an arm-wrestle for an hour and the teams were locked at 6-6 at half-time.

Saracens battled past Munster in their semi, but led just 6-3 at the break, and all three meetings between the finalists in the 2014-15 season featured close, low-scoring first halves.

In the first pool match in England the teams were level at 10-10 after 40 minutes, Clermont led 10-3 in the return fixture in France, while when they met in the semis Sarries led 6-3 at the interval before going down 13-9.

It is in the nature of knockout games, and especially finals, to be tight and Saracens’ natural defensively minded and low-risk gameplan is perfectly tailored to keeping the lid on a game and staying patient until opportunities arrive.

The half-time handicap is set at three points with most firms but it looks wise to take a shorter price of 8-11 for an extra half-point that will provide a winner if there is just one penalty in it. And at 12-1 it has got to be worth chancing that the teams are level at the break again.

Clermont are missing stellar names Wesley Fofana and Noa Nakaitaci from their backline and without them may lack the bit of stardust needed to create a vital breakthrough. That gives ex-Saracen Strettle another chance to shine on the wing – he is 3-1 to score a try.