Racing look too big for victory at Clermont 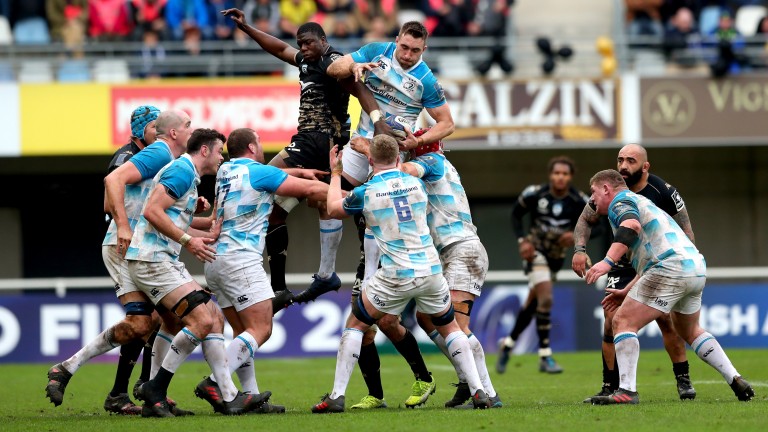 Victory in Montpellier made it six wins out of six for Leinster in their Champions Cup pool
Â©INPHO/James Crombie
1 of 1
By Graham Woods 8:00PM, MAR 31 2018

Reigning European champions Saracens scraped into the quarter-finals of the Champions Cup with just three wins from their six pool matches and the result is an away trip to top seeds Leinster, who swept a perfect six from six.

Three-time winners Leinster were the standout team in the pool stage, although even though they failed to win half their matches Sarries still finished as top scorers with 205 points and 24 tries.

So these are clearly two high-calibre teams, and while Leinster have proved their consistency, Saracens are built for knockout rugby and have happy memories of last year's semi-final win over Munster at the Aviva Stadium.

A lot has been made of the differing demands on players at the top English and Irish clubs, and the Ireland Grand Slam stars in the Leinster line-up were given a week off last weekend while Maro Itoje and Richard Wigglesworth were starting for Saracens in the Premiership.

But with just a one-week gap between the end of the Six Nations and the return to European action, that game time might be of benefit to the Saracens players and Leinster may not be able to instantly find the sparkling all-round game that they displayed to top a fiercely tough-looking pool.

Saracens fly-half Owen Farrell missed last weekend's game through injury and was reported as a doubt for this match so may well be short of 100 per cent, while centre Brad Barritt has had surgery to his cheekbone in the week.

Those issues may prove a factor by the end but there is no reason to think Saracens won't be competitive and this should be close-fought all the way.

Barring this season's heavy home defeat to Clermont, a match played in highly unusual circumstances as kick-off had to be pushed forward to a Monday afternoon, Sarries' only defeat in Europe by more than 12 points came in the 2014 final to Toulon. A home win within that margin is a 6-4 shot, and it may be worth taking the chance on a Saracens-Leinster double result at an appealing 6-1.

The day's other quarter-final is an all-French affair between Clermont and Racing 92 (Sky Sports Action, 1pm). Three-time runners-up Clermont are well off the pace for the Top 14 playoffs and their European run has been in stark contrast to their domestic form.

They edged Racing 23-21 at home early in the season but were hammered 58-6 when the teams met in Paris at the start of the year, and go into this fixture following a 49-0 reverse at Toulon.

Clermont are a different prospect at home but Racing have a strong team out and look overpriced at 2-1 for a rare away win.