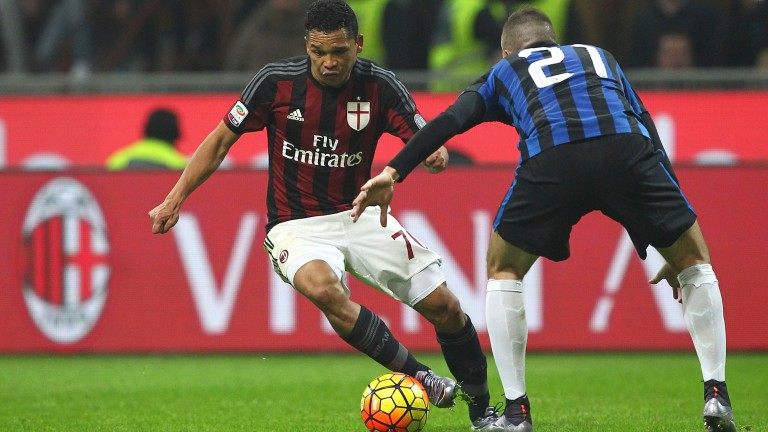 La Liga
Sky Sports 3, 11am
Espanyol are unbeaten in five La Liga matches and they look good value to continue that trend with a win against Alaves. The hosts have found only Real Madrid too strong at the Mendizorroza this term but Espanyol could be a different proposition now their well-regarded summer purchases are beginning to find the feet.

Serie A
BT Sport 2, 11.30am
Sampdoria have picked up ten of their 15 points in Genoa this season but they could find free-scoring Sassuolo tougher. The visitors started the weekend as fourth-highest scorers on the road, while Samp have notched in all but one of their matches this season so backing both teams to score could well pay.

Key stat
Both teams have scored in the last five meetings

Eredivisie
Sky Sports Mix, 1.30pm
Ajax are long odds-on to beat Nijmegen and the Amsterdam outfit should oblige. There’s not much juice in the price, however, and those wanting a bit more bang for their buck should chance the hosts to win 3-0. Ajax have found their shooting boots recently and could run out easy winners.

Ligue 1
BT Sport ESPN, 2pm
Guingamp’s home form has been phenomenal this season but they are not certain to make it five wins from six when they host Bordeaux. Girondins have scored just once in three away games but don’t lose many and could frustrate the hosts. Going under on goals looks smart.

Bundesliga
BT Sport 2, 2.30pm
High-flying Hoffenheim are one of only five sides in Europe’s five major leagues who started the weekend unbeaten and they should make light work of ailing Hamburg. The visitors have claimed only two points and scored just four goals and the former European champions look severely up against it.

Key stat
Hoffenheim are unbeaten in 13 games this season

Serie A
BT Sport 3, 2pm
Roma have been flying at home but their away form has paled in comparison and they might find Atalanta harder to crack than the odds suggest. The hosts have lost just twice on their own patch this season, and have picked up wins against both Napoli and Inter.

Eredivisie
Sky Sports Mix, 3.45pm
Feyenoord’s blistering early-season form has slightly tailed off but they should get the job done at home to Zwolle. The visitors are unbeaten in five but they have been found wanting against the Eredivisie’s big boys and another chastening trip looks in store.

Ligue 1
BT Sport 3, 4pm
Marseille coach Rudi Garcia is steadying the ship but the former Roma boss is short of attacking firepower. OM have taken five points from four Ligue 1 games under Garcia, despite scoring only two goals, and they could nick a narrow win against a Caen side who have lost five of their six away fixtures.

Bundesliga
BT Sport 2, 4.30pm
Eintracht Frankfurt have made a fine start to the campaign, with five wins and creditable draws with Bayern Munich, Monchengladbach and Hertha Berlin among their first ten results. Hosts Werder Bremen have been stumbling out of the blocks – they’ve trailed at half-time in four of their last five outings – and the visitors could take charge early on.

La Liga
Sky Sports 5, 5.30pm
Sociedad are on a good run of late, winning their last three La Liga matches to nil, and they should prove too clinical for struggling Gijon. The hosts have failed to win in the league since mid September while Sociedad, who outshone Atletico a fortnight ago, have won five of their last seven and will have their eyes on qualifying for Europe this term.

La Liga
Sky Sports 5, 7.45pm
Only Barcelona have upset Athletic Bilbao on their own turf this term and it’s unlikely Villarreal, who have won just once on their travels in 13 matches, will do so. The visitors sit five points ahead of Athletic but that’s solely down to their home form and only Deportivo and Gijon have registered fewer goals than Villarreal on the road.

Ligue 1
BT Sport 3, 7.45pm
Nice are showing signs of cracking having suffered back-to-back defeats and with leading scorer Mario Balotelli suspended it could pay to support St-Etienne to triumph. St-Etienne’s problem is they draw too many games – they have shared the spoils in half of their Ligue 1 matches this term – but they have lost just once in the league at Stade Geoffroy-Guichard since March.

Serie A
BT Sport 2, 7.45pm
The San Siro co-tenants have had contrasting starts to the season with Milan winning seven of their last nine league games and Inter sacking coach Frank de Boer. However, Inter scored three times in the last six minutes to earn a morale-boosting win over Crotone last time and they have the attacking quality to earn a point.