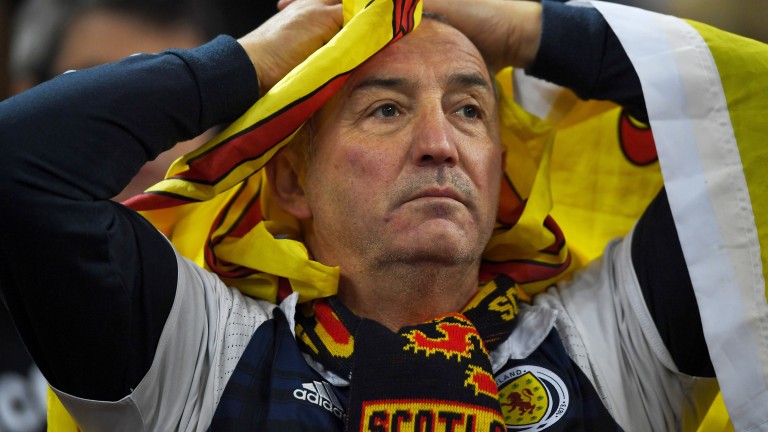 Four days after Scotland suffering the indignity of a crushing defeat in Kazakhstan, punters have every right to smirk at the 1-25 being dangled about them bouncing back with a win in San Marino.

Even allowing for Scotland’s knack of embarrassing themselves on the international football stage, they should surely chin one of the world’s very worst sides at the San Marino Stadium.

The fact that there is actually a debate in some places as to whether or not Big Eck’s flops can pull off a Group I triumph in Serravalle shows how unbelievably awful they were last time out.

But Tartan Army bashers need not get carried away. San Marino are beyond dreadful and Scotland – even this Scotland – must surely be too good for them.

As ever with mismatches like these it’s hard to summon up much enthusiasm for a bet. Confronted by four Scots at odds-on in the anytime scorer betting merely illustrates what little value is on offer for punters who can’t see past an away win.

Scotland will be a better-balanced side with skipper Andy Robertson and Bournemouth flyer Ryan Fraser returned to the fold and while there are questions galore over McLeish’s management, this is still a good enough starting side to beat poor opposition.

And San Marino are seriously poor. Comparing them with Kazakhstan would be comparing Liverpool with Crewe.

The underdogs have just three professionals in their ranks and one of them is keeper Elia Benedettini, who is yet to keep a clean sheet in 14 appearances for his national side.

They are on a run of seven straight defeats to nil under coach Franco Varrella, the most recent of which was Thursday night’s 5-0 drubbing in Cyprus.

They haven’t scored a goal since September 2017 and of their 154 international fixtures, 131 have resulted in defeats to nil.

That’s what the Scots are up against and it really isn’t much.
It’s not easy to articulate that disparity in a bet given the prices on offer but given the pressure which has piled up on Scottish shoulders, it could pay to expect a fast start.

Cyprus were four up inside 31 minutes in Nicosia and while it might be a big ask from Big Eck to see that repeated, backing the first half to produces most goals is a fair enough proposition.

The onus is on Scotland to get the game won early and it’s doubtful that San Marino are going to be good enough to stop them.

Recommendation
First half to have more goals
1pt 23-10 Coral, Ladbrokes

Scotland
Skipper Andy Robertson, Callum Paterson and Ryan Fraser are available. Alex McLeish has been hit by a string of withdrawals.

Key stat
San Marino have lost 149 of their 154 internationals.