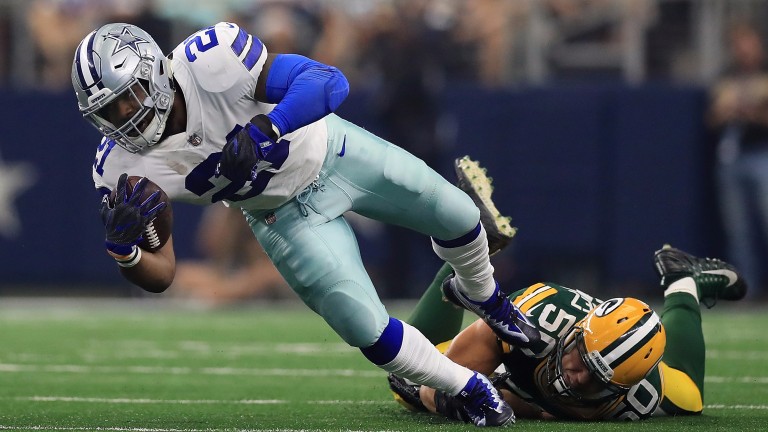 Two teams head into Week Seven of the NFL season without a win to their name, but while there seems little sunshine on the horizon in Cleveland, there have to be hopes that the tide is turning in San Francisco.

There have been many changes in north California with Kyle Shanahan taking the reins as head coach after helping steer Atlanta to the Super Bowl as offensive co-ordinator last season.

And there is a feeling that they just cannot get themselves over the line as their last five losses have all been by a margin of three points or fewer.

Rookie quarterback CJ Beathard was given his opportunity against the Redskins last week and should come on for the experience - with one touchdown pass and one interception, it was not a disaster - and the Niners take on a defence who have conceded 35 points in each of their last two outings.

The Cowboys have struggled against the run, which should be good news for running back Carlos Hyde, who should be heavily involved having scored two touchdowns last week.

Dallas rusher Ezekiel Elliott has been allowed to play as the legal disputes regarding his potential six-match suspension rumble on, but the situation is in danger of being a distraction.

The Cowboys had last week off but they will not be able to take things easy and can ill-afford to have one eye on a key divisional clash against Washington next week.

San Francisco have been competitive on trips to Arizona, Indianapolis and Washington in the last three weeks and should be again now they have returned to their own patch.

The Chargers were in danger of being tailed off in the competitive AFC West after losing their last four matches, but they should take a great deal of confidence into their match against Denver after successive victories.

The Broncos meanwhile were inept in losing 23-10 to a banged-up New York Giants last week and may take their time to get going.

It will not be easy for the Chargers, who have struggled to adjust to their move to LA, where the atmosphere has been quiet at their smaller stadium, but they still have the talent to trouble the Broncos.

Denver are good at stopping the run, but rusher Melvin Gordon should be up for the challenge after an effective display against Oakland last week, while tight end Hunter Henry and receiver Kennan Allen also provide good outlets.

If the Chargers can improve their own rushing defence and keep CJ Anderson and Jamaal Charles quiet, they should have an excellent chance against a team who have scored an average of just 14 points in their last three games.

Best total-points bet
Over 43 points in Jacksonville at Indianapolis

Many of Indianapolis's woes this season have centred on the unavailability of quarterback Andrew Luck, but the Colts have also had their fair share of defensive problems.

No team in the league have conceded more points than their average of 32.5 per game and that alone suggests a 43-point total can be eclipsed in their all-AFC South clash with Jacksonville.

The Jags have struggled to post decent performances in successive matches, but they are in the thick of the battle to win what is emerging as the game's tightest division.

There is an injury concern about running back Leonard Fournette, who has had an excellent start to the rookie season, but they are capable of keeping the scoreboard ticking over, having scored 79 points in their three road trips and 44 in their thumping win over Baltimore at Wembley in Week Three.

Carolina's offence would be a lot stronger if tight end Greg Olsen had not suffered a foot injury, but receiver Devin Funchess is a player who has been taking advantage of the opportunity.

The 2015 second-round pick from Michigan has scored three touchdowns since Olsen was crocked in Week Two and while he was not heavily involved in last Thursday's defeat against Philadlephia, he could play a bigger role against Chicago, particularly as the Panthers' have struggled to run the ball.