Saints are fancied to shoot clear of Tigers after the interval

Barba should get chances to prosper against Castleford 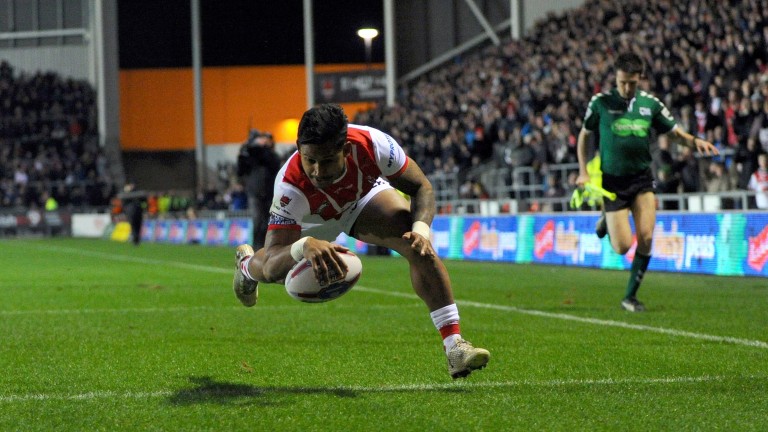 On Sunday it will be a year to the day since Castleford annihilated St Helens 53-10 in the sixth round of the Ladbrokes Challenge Cup, but 12 months is a long time in rugby league and Saints look set for revenge in the latest rumble at the Jungle.

This time last year Cas were clear at the top of the table, while St Helens had just sacked coach Keiron Cunningham and were waiting for new boss Justin Holbrook to arrive from Australia.

Holbrook has since guided Saints to the Betfred Super League summit, while the Tigers have struggled to repeat last season's form in an injury-hit campaign.

There were strong signs of a St Helens revival at the end of 2017 when they won 26-12 at Castleford in the Super 8s and lost the playoff semi-final in extra-time at the same venue.

Saints should have won that tie and underlined that point by routing the Tigers 46-6 at home in the opening round of Super League XXIII.

The brilliant Ben Barba scored twice in a man-of-the-match-winning display that night and the world-class full-back is set to return to action after sitting out last weekend's win over Catalans with a neck injury.

Barba has won the individual honours four times in his six televised appearances in 2018 and and is difficult to resist at 4-1 in the man-of-the-match market.

St Helens would almost certainly have to win for Barba backers to collect and the visitors are 4-9 to do so. Backers of Saints on the handicap are asked to give up eight points.

The best way to support Saints may well be in the second-half markets. The league leaders are 4-6 with Hills to win the second stanza, something they've achieved ten times in 14 league games this year.

By contrast, Castleford have struggled after half-time this year, posting more points than their opponents only three times in 12 matches.

More ambitious punters may prefer to take the 10-11 against the favourites covering a four-point second-half handicap with Ladbrokes.

Saints won the second half 24-6 when the teams clashed in February.

In Saturday's other tie Catalans Dragons face a straightforward task at home to third-tier Whitehaven, but it's difficult to be enthusiastic about backing the Super League cellar-dwellers to concede a handicap in the mid-40s.

Holders Hull became the first team through to the quarter-finals when they beat Championship opponents Featherstone 38-20 in a bad-tempered battle at Post Office Road on Thursday.

Six players were sin-binned and Hull's Bureta Fairamo was sent off.
The Airlie Birds are 6-1 to lift the trophy for a third straight season.