Russia move to brink of knockouts with Egypt win 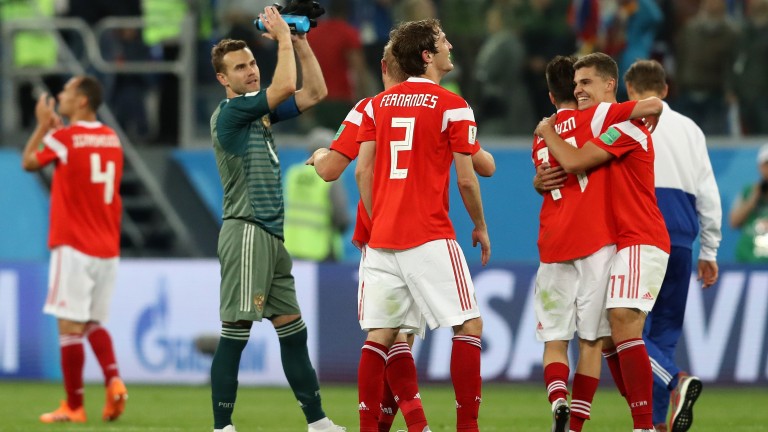 1 Hosting the World Cup is a huge help

South Korea caused a stir when finishing fourth as hosts in 2002 and Russia have their own ambitions of making home advantage count after easing to victory in their opening two group matches.

It is eight goals scored and just one conceded for a ruthless Russia, who are growing in confidence as the tournament progresses.

Stanislav Cherchesov’s men were being readily dismissed heading into the World Cup as they endured a seven-match winless run but they are thriving under the pressure and convincing victories over Saudi Arabia (5-0) and Mohamed Salah’s Egypt (3-1) have earned them respect.

Russia are likely to fall short - Alan Dzagoev’s injury reduces their creative spark - but they can at least make life tough for Uruguay in their bid to progress as group winners.

Mohamed Salah carried Egypt to the final of the Africa Cup Of Nations in Gabon last year but it isn't as simple as that against the world's elite.

Egypt failed to score against Uruguay in their opener and needed a VAR-awarded Salah penalty to make their mark against Russia, which was their only shot on target.

Egypt have netted in just two of their last six matches and taking short prices about the shot-shy Pharaohs sinking Saudi Arabia, with key man Salah far from 100 per cent, makes little appeal.

3 Ageing Russian defence could be exposed in knockout stages

Russia are on the brink of a place in the knockout stages but it could be last-16 and out for the hosts.

Russia's back four consists of 34-year-old Yuri Zhirkov and 38-year-old Sergei Ignashevich and although experienced, they could be easily exposed when faced with a free-flowing frontline.

If Russia fail to win the group it could be silky Spain to come in the last 16. They play possession-based football, and their quick, intricate passing could see the hosts' ageing defence tire.