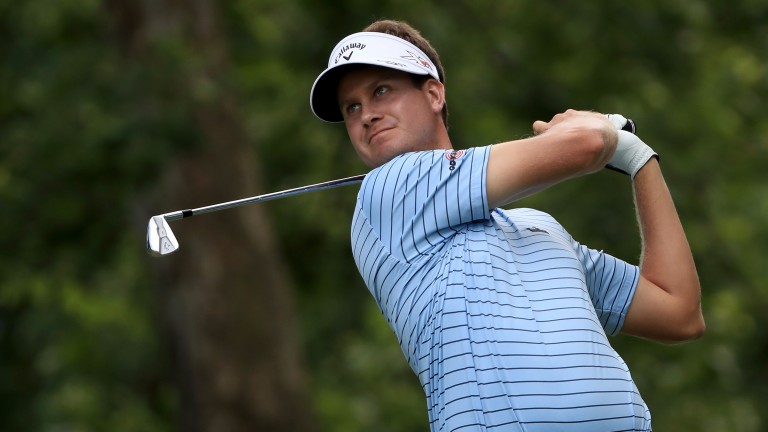 Adam Hadwin was easy to back at 100-1 for the Valspar Championship ante-post, but the US Tour maiden is no bigger than 1-2 with 18 holes to play.

Hadwin has reached 14 under par through three rounds at the tough Copperhead Course in Florida, leaving the in-form Canadian four shots ahead at the top of the leaderboard.

Patrick Cantlay, a 400-1 pre-tournament rag, is in second place. More established US Tour stars have failed to find top gear. Ante-post favourite Justin Thomas missed the cut by three shots. Henrik Stenson started superbly, opening with a seven-under-par 64, but he remains on that score after back-to-back 71s.

Cantlay is 15-2 for a breakthrough triumph, while Open champion Stenson can be backed at 10-1 to overcome his seven-shot deficit on Hadwin.

Adam Hadwin is a 29-year-old who has been threatening a maiden US Tour title all season. He slipped to 200th in the world rankings after missing the cut in the Safeway Open in his first start of the campaign, but is inside the top 100 eight tournaments later.

The CareerBuilder Challenge at the end of January is the closest Hadwin has come to getting his hands on a trophy. He fired a third-round 59 to take control, but Hudson Swafford edged him by a shot in a tense final-round duel.

Hadwin, who has won twice on the Web.com Tour, has never had a better chance than this of getting off the mark on the US Tour. His four-shot advantage is over a fellow maiden, and one who is playing under pressure on a medical exemption.

Patrick Cantlay is a fantastic talent who appeared to have the world at his feet when he first entered the professional ranks in 2012, but injuries quickly derailed his career. The Valspar is just his second US Tour start since November, 2014. He spent more than a year on the sidelines with a crocked back.

If you offered Cantlay the runner-up cheque before round four started, he would be strongly advised to accept it, securing his US Tour future. There will probably be a devil on the shoulder of Cantlay during the final round, urging him not to be too aggressive in chasing Hadwin, risking a drop down the leaderboard. Third place or worse leaves Cantlay with work to do to stay on the elite circuit.

Hadwin is obviously happy with his position on the leaderboard, and so is Cantlay, so some defensive golf can be expected in the final twoball. Expect both to hover around the score they are on at the moment.

Jim Herman is an archetypal plodder who is able to compete on courses like this one, where course-management and precision are essential, but his unconvincing putting stroke will probably become less efficient the closer he gets to the finishing line.

Henrik Stenson and Charl Schwartzel are two class acts close enough to enter the fray, but both have little margin for error. Stenson will be disappointed to have carded a pair of 71s over the last two rounds, but if he bookends them with another 64, Hadwin may feel the heat.

Schwartzel impressed yesterday in his 67 and the defending champion should move closer to the lead in round four, but giving an eight-shot start to Hadwin is almost certainly too much for a South African who rarely gets hot with the putter these days.

The leaderboard may not see much change in the final round. Stenson can be fancied to finish strongly and may pip Cantlay and Herman for second place, but the Swede needs serious heroics to trouble Hadwin.

Final-round twoball punters are pointed towards Harris English, who won a prestigious amateur tournament on the Copperhead Course and has come alive on it over the last two days. English opened with a 77 on Thursday and looked set to miss the cut, but rounds of 65 and 69 have moved the Georgia man up to 25th spot.

English can outscore the erratic and inconsistent Morgan Hoffmann in the 3.55pm (UK and Ireland time) twoball. High-rollers will be eyeing up the 2-5 about Stenson beating JJ Henry in their 5.35pm meeting. Henry is one of the worst players on the US Tour.