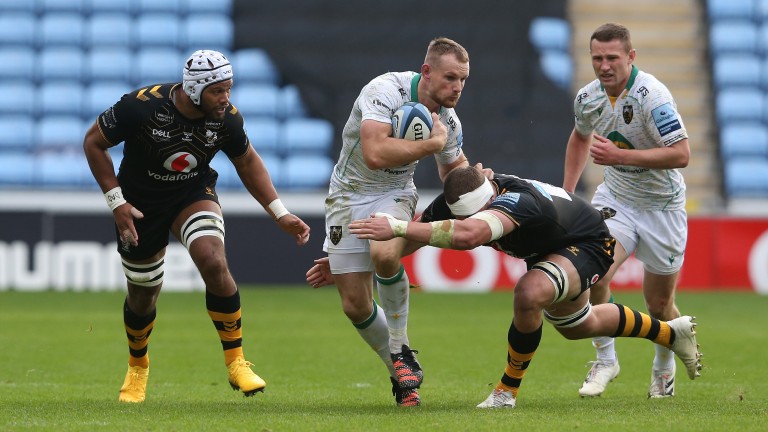 Northampton are aiming to bounce back from defeat against Wasps last time out
Stephen White - CameraSport
1 of 1
By Graham Woods 2:36PM, OCT 21 2021

It's only mid-October but already alarm bells will be ringing in Worcester after back-to-back heavy defeats in which they have shipped 90 points and 14 tries.

The Warriors finished bottom of the table last season and won just one match - the table credited them with four victories but three were awarded after Covid cancellations.

That sole win on the pitch came in round one against London Irish, and there's an eerie parallel in this campaign as Worcester again beat the Exiles on the opening weekend but haven't won since.

On the plus side Worcester have looked good in spells, and their heavy defeats have come against leaders Leicester and last year's runners-up Exeter. And there is more experience in their line-up for this encounter, with former England scrum-half Willie Heinz returning to skipper the side plus ex-Leicester lock Graham Kitchener making his first start.

Northampton's winning start to the season was ended at Wasps in round four but they should be fresh after a bye last week.

The Saints have gone heavyweight for this clash, with Courtney Lawes starting in the back row rather than second row plus a six-two split of forwards and backs on the bench.

In all four of their Premiership matches Northampton have had their first try on the board within the first 15 minutes, and with the focus on their forward strength they may well look to get on the front foot from the start again.

Confidence is likely to be low in the Worcester camp and an early blow could leave them with a mountain to climb, and lead to another wide-margin defeat.

The handicap is set in the teens but Worcester have scored just one try in their last two matches and were the lowest tryscorers in the competition last season so may struggle to keep it close.