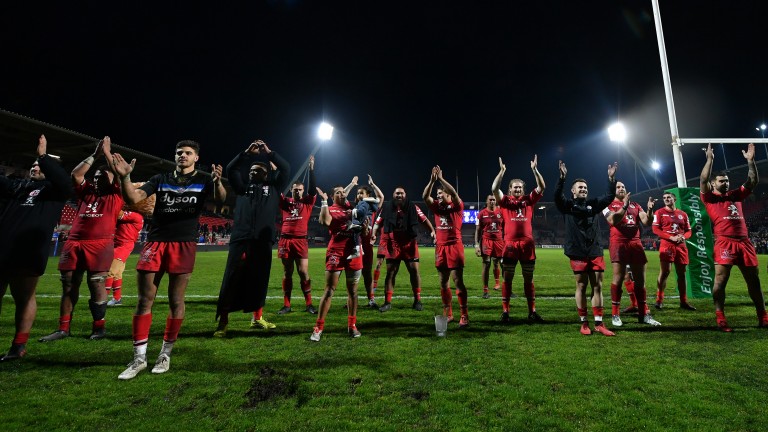 Many are called but few are chosen. Just five of the 20 teams who set out on the road to European Champions Cup glory this season have tasted victory this century, and the same three names have appeared on the trophy in the last nine years.

European domination has come in spells. Saracens have won three of the last four Champions Cup finals, before that Toulon won three in a row, and before that Leinster won three out of four.

Toulon were the last French club to rule the roost thanks to the superstar squad assembled with the wealth of owner Mourad Boudjellal but their fall from grace since then sees them line up in the Challenge Cup this year, and bookmakers have put last year’s finalists Leinster and Saracens at the top of the betting again.

But some of the Top 14’s biggest guns are hovering below them in the betting and look to be too easily dismissed.

Inaugural European champions Toulouse last lifted the trophy in 2010 after an all-French final in Paris, and they look a terrific price to be celebrating at the end of the 2020 showpiece in Marseille.

Les Toulousains struggled to hit the heights of their glory days for long spells but last season they served notice that they were back in the big time, topping the regular-season table and claiming their first Top 14 title for seven years, beating Clermont in the final.

They also reached the Champions Cup semi-finals for the first time since 2011 and will be gunning for another long run in Europe having been drawn in a reasonable pool.

There’s a wealth of international talent in the side including Romain Ntamack, who claimed the France number ten jersey at the World Cup but lines up more often at 12 for his club, and a back-three perm of Thomas Ramos, Yoann Huget, Cheslin Kolbe and Maxime Medard.

But it’s not all about a slick backline as Toulouse also offer plenty of power up front, bolstered by the arrival of Australia lock Rory Arnold, and set-piece strength will be a huge factor given the late start this year, with all pool matches staged from November to January.

Parisian outfit Racing 92 have appeared in two of the last four finals but are a big price to go one better thanks to the hand they have been dealt in their pool.

Reigning champions Saracens and two-time tournament winners Munster are their rivals in Pool Four but the French outfit look more than capable of coming out on top in that battle.

The crucial factor will be Saracens’ level of commitment as they face up to the possibility of a 35-point deduction and consequent battle for Premiership survival. The sanction has not yet been enforced following an appeal but Sarries can’t wait for the outcome and will almost certainly prioritise the need for points at home.

Saracens’ second string is still a pretty strong unit but the experience and nous that brought them back from 10-0 to beat Leinster 20-10 in last season’s final may not be there for big tests at Thomond Park and La Defense Arena.

Racing are formidable foes at their cauldron of a stadium and have also picked up three wins and three bonus-point defeats in their away matches in the last two European campaigns so there is no doubt they have the strength in their squad to mount a serious challenge again.

There is little incentive to back defending champions Saracens at the available prices given their off-field distractions. There is plenty of class in their squad to battle on two fronts, but the European pool battle is a short, unforgiving campaign in which one slip can prove decisive.

Favourites Leinster will have plenty of backers but their pool rivals Lyon and Northampton have made strong starts to their domestic season and will take them on at home in rounds two and three. After a disappointing World Cup, Leinster’s international cadre will be under pressure to hit the ground running.

Clermont are another French side who should have a good chance. They won the Challenge Cup last season with some ease and reached the Champions Cup final three times in the previous five seasons. They face Harlequins, Bath and Ulster in their pool and have won six of their last eight away pool matches against Premiership or Pro14 opponents.

Exeter are high up in the betting too, but have yet to really crack Europe having made one quarter-final appearance in six campaigns.

Munster have made the semi-finals in the last three campaigns but need to find more of a scoring edge if they are to push for a high seeding.