Rudolph can be the man to tip the balance for Vikings

Tight end should prove to be a huge threat 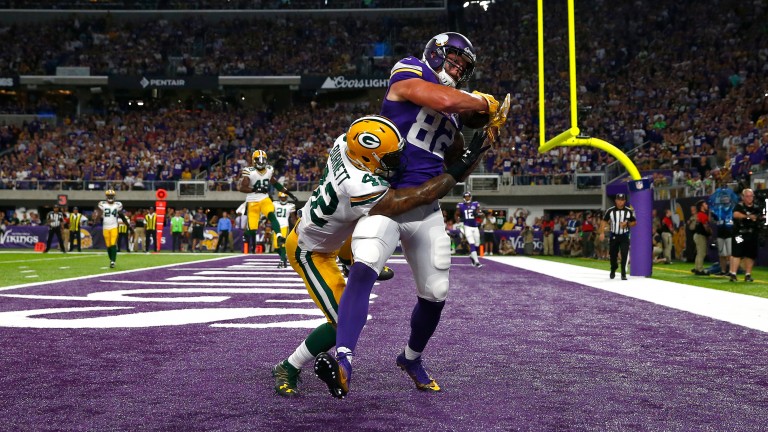 As Green Bay have suffered five defeats in their last six matches, today’s first NFL Thanksgiving offering has an air of a playoff game as victory would allow Detroit or Minnesota to grab a stranglehold on the NFC North.

The Vikings and the Lions have each won six of their ten games and overtime was required to separate them when they met in Minneapolis three weeks ago as Detroit claimed a 26-20 success.

The Lions have never won the division since it was created in 2002 and have finished second just twice, so this is a massive opportunity for the team who traditionally kick off the holiday fixtures.

This could be just the third time in 16 seasons that Detroit claim a winning record.

But it would be easy to conclude that they have been riding their luck to some degree.

They have been trailing in the fourth quarter in each of the six matches they have won and all ten of their games have been settled by a margin of seven points or fewer.

Minnesota arrested a four-match losing run when they saw off Arizona on Sunday, aided by defensive and special-team touchdowns, and it was just what they needed having won their opening five matches.

They had failed to score more than 20 points in any of their four defeats and this is not a game in which either side look set to get their rushing game going.

Only two teams have run the ball for fewer yards than the Lions and one of those are the Vikings.

Minnesota quarterback Sam Bradford will look to go through the air and they will be hoping that wide receiver Stefon Diggs will be able to play a full part.

He has been nursing a knee injury since their victory over the Cardinals.

That could point to a heavy involvement for tight end Kyle Rudolph, who has been Bradford’s second-favourite target this season and has matched the touchdown tally of five that he posted in the whole of last season.

Rudolph has found the end zone in each of his last three matches against the Lions and should prove a valuable outlet if Minnesota get around the goal line.

He is good value to score a touchdown in what is set to be another tight affair.

Team news
Minnesota Wide receiver Stefon Diggs is questionable with a knee injury, while safeties Harrison Smith and Andrew Sendejo are also questionable. Cornerback Terence Newman is struggling with a neck problem.
Detroit Tight end Brandon Pettigrew is still out with a knee injury. Safety Don Carey injured his hamstring in Sunday’s victory over Jacksonville and is questionable as are left guard Graham Glasgow and safety Don Carey