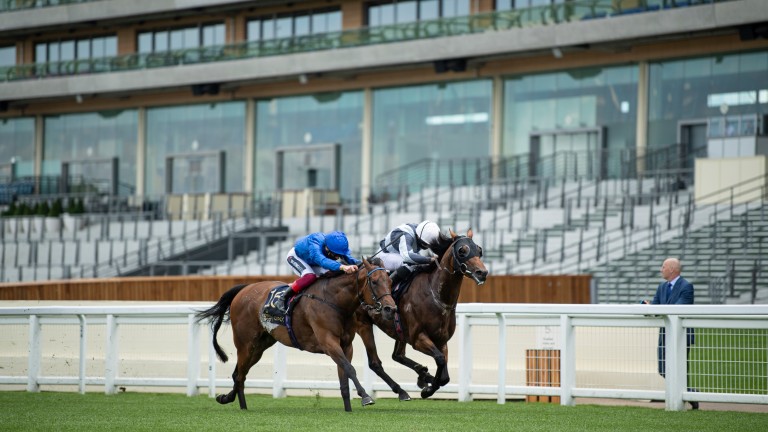 We all know it, but it needs saying loud and clear - racing’s return after the lockdown stoppage has been a spectacular success and thousands of people deserve enormous praise for enabling it to happen.

Royal Ascot taking place in an atmosphere reminiscent of Southwell on a bitingly cold January is not what anybody wanted, but it is better than no Royal Ascot at all and has provided the culmination to a sensational resumption of the sport.

While so many other sports rushed to cancel their showpiece events during the height of the pandemic or got themselves embroiled in internal squabbles with their participants, racing’s leaders got on the front foot and prepared to hit the restart button as quickly as possible, which turned out to be on June 1.

Since then a deftly rehashed fixture list has provided a continuous stream of excellent action that has created at the top end a solid and fascinating foundation for the remainder of the Flat season while also giving plentiful opportunities to the owners of most types of lower-grade horses.

It has been a superb, collective triumph of organisation and hard work in difficult circumstances and its reward will take the form of minimal disruption and the biggest possible financial injection from the betting it has stimulated.

So thanks are due to the BHA, to racecourse management teams and their staff, and to the trainers, jockeys, stable staff, stalls handlers, vets and other officials who have come together to put on the best possible show in the circumstances.

And may the owners who continued to pay their bills and prevent a serious problem enjoy as much success as possible.

Obviously, the future is still far less rosy than it was before the virus arrived. Ascot’s prize-money this week is down from £7.33 million to £3.68m despite staging six more races, which shows how much less money racing’s professionals will be sharing for the foreseeable future, and that is going to make life tough for those trainers, jockeys and others already struggling.

But had racing’s senior figures not got together so effectively things would have been even worse, and hopefully the next step in the recovery plan, the readmittance of racegoers, will not be too far away.

Much though I have loved the action at Ascot this week, however, there has been a lingering sense of sadness. Ed Chamberlin said during Tuesday’s ITV coverage: “I must stop saying how strange it feels without crowds,” but a refusal to say it does not mean he is not right.

Royal Ascot is usually one of the greatest events in Britain. People from all walks of life converge on the spectacular venue to have a great time. The whole thing is just magical and I miss it like mad.

Many racing purists will delight in the absence of fashion slots on ITV and reporters asking tipsy office workers who they are going for in the next, but I love the whole crazy, marvellous week, and can’t wait to give it full gas next year.

At one point on Tuesday, in a desperate bid to reenact the communal Royal Ascot experience, I shot up to my local betting shop.

It looked and felt broadly like it used to. Various Perspex screens had sprung up around the machines, and the comfy seats in the middle had been replaced by a tilted display screen featuring not the Royal Ascot pages of the Racing Post but some Bags meetings.

There was the familiar sight of someone tapping away at a FOBT and even someone else who was there to watch and bet on the racing, and I felt obliged to place a wager to keep the venture afloat even though the company I was betting with has a far fairer chance of making it through the Covid crisis than the bloke who owns the chip shop next door.

So I wrote out my slip, gave it to the manageress and proffered my phone as a payment method. She tutted and told me they didn’t accept Apple Pay. “You should have told me before I put it through,” she informed me bluntly.

I suppose her rudeness provided a momentary blast of nostalgic value, a feeling like you were back in an early-1980s betting shop, but it was not really the kind of service that cuts the mustard these days.

I then saw a notice fully three feet from where she sat informing customers the shop accepted Apple Pay. “Well, we never used to,” she responded charmingly. “Come on then, give it another go if you want.”

Despite my limited appetite to continue our relationship I scribbled out another slip and, lo and behold, the telephonic transaction went through without a hiccup, which was marvellous news until the selection, Mogul, slumped to fourth place.

Still, three other racing fans entered the shop to watch the race, which they seemed to enjoy no end judged by the way they swore at Mogul’s jockey Ryan Moore and slunk out of the door before the horse had crossed the line.

Yep, it’s great to have racing back.

Some sports need crowds more than others to create an atmosphere without which the spectacle can seem rather hollow. But the evidence of last week shows there is one that can’t just cope perfectly well without spectators but is actually better off without them.

It has been lovely to see top-class football and racing again but it has not felt quite the same without the sounds of cheers from the stands. By contrast it was utter bliss to be able to enjoy the first golf tournament post-lockdown.

This was not just because the US Tour provides four days of guaranteed intrigue every week, but also because for the first time it was evident that American golf galleries are a nuisance.

The obvious benefit of the action unfolding on greens and fairways not flanked by fans is that there are no morons yelling inanities like “get in the hole” and “mashed potato” a micro-second after a player has struck his shot.

It is one of life’s enduring mysteries that a sport that is so mired in pointless little rules and regulations tolerates this ridiculous blight. If you can incur a two-stroke penalty for letting your club accidentally brush a dandelion petal on your backswing or whatever, the punishment for shouting get in the hole should be instant ejection from the course and your wallet or mobile phone dunked in marmalade.

It was so nice to be able to watch a high-quality field fight it out for top spot in the Charles Schwab Challenge without these loud-mouthed halfwits ruining it, but even those who can manage to watch golf without suddenly bellowing random nonsense are not missed.

When you first go to watch professional golf it strikes you straight away how brilliant it is to be able to get so close to the action, with world-class players attempting to find the green from the rough a matter of inches from where you stand. It’s excellent.

But when you think about it there’s something uniquely weird about the potential for the paying public to affect the outcome of even the best tournaments by their presence on the course.

A ball that could be hurtling towards a pond can instead hit someone and bounce to the safety of the green. And that’s allowed. I cannot think of another sport where the crowd can have such an influence, albeit an accidental one.

Last week bad shots were getting what they deserved instead of hitting someone’s deckchair and stopping in a safe place, and players were unable to gain the usual infuriatingly lucky drop when they smashed a wayward shot into the grandstand.

As someone who enjoys an annual visit to a golf tournament I would miss the experience, but the rest of the year I am an armchair viewer and the longer golf takes place in silence and emptiness the better.

FIRST PUBLISHED 2:28PM, JUN 17 2020
It has been a superb, collective triumph of organisation and hard work in difficult circumstances