Ronaldo can blast Portugal past Hungary 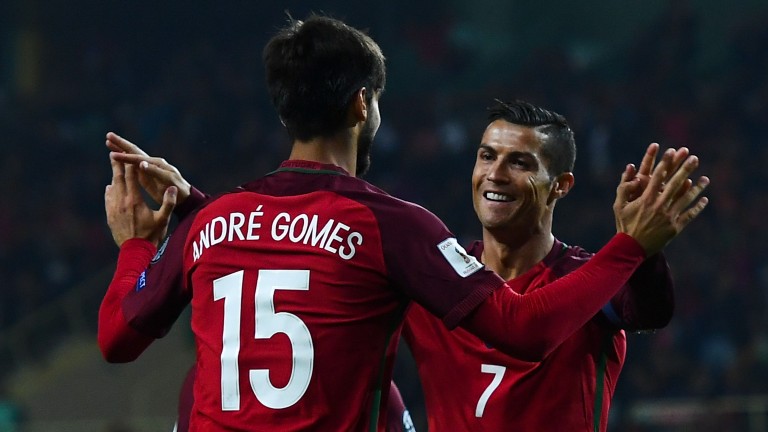 Cyprus v Estonia
Sky Sports red button, 5pm Saturday
The profile of club football in Cyprus has been raised by the progress Apoel Nicosia have made in recent years.

Cyprus's national team have not caught the eye to the same extent but they look the fourth-best side in World Cup Qualifying Group H and can show it by defeating Estonia, who are seeded one place above them.

During Euro 2016 qualifying Cyprus registered impressive 2-1 away victories over Bosnia and Israel.

They have made a slow start to World Cup qualifying, losing three out of four, but look a far more competitive bunch than Estonia who lost 8-1 in Belgium in November.

The Estonians have lost nine of their last ten competitive away games - the exception being a 0-0 draw against San Marino – and they may struggle to contain Cyprus's lively attacker Dimitris Christofi, scorer of seven goals in his last 11 appearances for Omonia Nicosia.

Sweden v Belarus
Sky Sports 1, 5pm Saturday
Sweden were supposed to struggle after Zlatan Ibrahimovic's retirement but have been giving a good account of themselves in Group A and are likely to defeat Belarus in Solna.

The Swedes are warm favourites to defeat winless Belarus, who have lost away to Holland (4-1) and Bulgaria (1-0).

A new generation is filling the void left by Ibrahimovic and Leipzig attacker Emil Forsberg looks the pick of the bunch.

Forsberg has netted seven goals in the Bundesliga this season and was on target in Sweden's 2-1 loss to France in Paris last November.

The 25-year-old looks the main threat to Belarus and is worth backing to score the opening goal.

Team news
Sweden
Celta Vigo forward John Guidetti was called up to the original squad but has withdrawn with an injury.

Belarus
Alexander Hleb has withdrawn from the squad due to an injury and midfielder Timofei Kalachev retired from international football at the end of 2016.

Key stat
Belarus have lost eight of their last 11 competitive away matches.

Belgium v Greece
Sky Sports 2, 7.45pm Saturday
Belgium look in a class of their own in Group H and can cruise to victory over second-placed Greece in Brussels.

First place looks assured for the Belgians, who have 12 points from 12 and were 4-0 winners at home to Bosnia (the section's second seeds) last October.

Greece have picked up three wins against poor opposition but will struggle to lay a glove on Belgium, who look strong in all areas.

The Red Devils have kept three clean sheets out of four and another shutout looks likely.

Greece
First-choice goalkeeper Orestis Karnezis is ruled out after picking up an injury playing for Udinese earlier this month. Genk forward Nikos Karelis has been sidelined since December.

Portugal v Hungary
ITV4, 7.45pm Saturday
Portugal's 3-3 draw with Hungary at Euro 2016 was one of the most exciting matches of the tournament but a far more one-sided outcome is likely in Lisbon.

There is very little room for error for the European champions, who lost 2-0 away to Switzerland in their opening qualifier.

Hungary's best hope is to sneak into the playoffs via a second-place finish but they have been struggling since a 0-0 draw away to the Faroe Islands in September.

Any points they could secure in Lisbon would be a huge bonus but their resistance may soon be broken by a Portugal side spearheaded by Cristiano Ronaldo.

Team news
Portugal
Veteran winger Nani has been sidelined since February and back-up goalkeeper Anthony Lopes has withdrawn from the squad.

Hungary
Key midfielder Laszlo Kleinheisler is ruled out through suspension.

Key stat
Portugal have lost one of their last 13 matches.