Rising Korean has the game to tame Kingsbarns

Fiery Ciganda may step up to the challenge 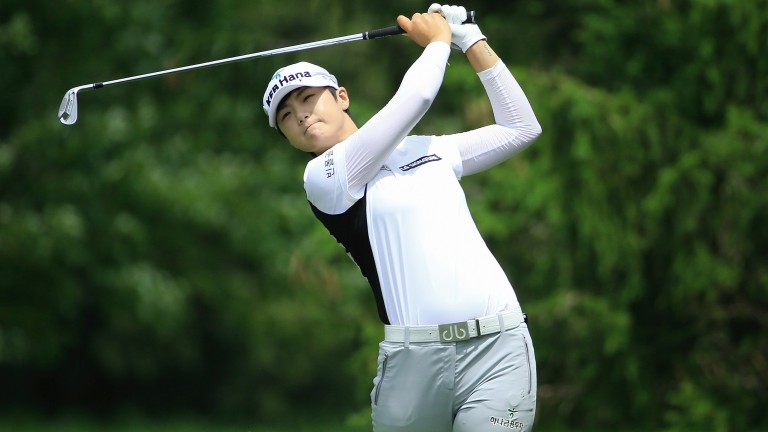 Tournament starts 7am Thursday
Live on Sky Sports Golf from 11am

Only two Brits, Karen Stupples and Catriona Matthew, have won the Women's British Open this century and with Charley Hull not at her best and anxious about how a wrist injury will hold up, the eight-year gap since the last home win is likely to be extended.

After finishing 44th in the Scottish Open on Sunday, nothing better than a ninth place all year and 21-MC-14 in the three Majors to date, Hull faces a tough task against the stars of Asia and the USA.

It is a course everyone wants to play, so the visitors will be out in force at spectacular Kingsbarns, a rugged modern-day links seven miles from St Andrews on Scotland's east coast.

With no European men's event this week, the Women's Open has a long daytime slot on the Sky schedule before coverage of the WGC-Bridgestone begins from Ohio.

It is odd to find Ariya Jutanugarn and Lydia Ko, the last two world number ones before So Yeon Ryu, quoted at 45-1 and 35-1 respectively but one has been injured and the other has given her game a big overhaul without getting the results she was after.

Two Koreans, Ryu and Sung Hyun Park, and an American, Danielle Kang, have won the first three Majors and this one looks every bit as open.

Ryu is not a strong world number one but Park will be. She's the one with potential. The 24-year-old with a swing to die for mopped up on the Korean Tour before deliberately holding back from joining the stronger LPGA until she felt she belonged.

The results have been outstanding with a first victory coming at last month's US Open. It was a good place to start and it won't be the last.

If a European is to challenge, it could be fiery Spaniard Carlota Ciganda who was fourth in Sunday's Scottish Open and fifth at the US Open.

Those who, like Ciganda, played well at Dundonald on Scotland's west coast last week should have an edge as they are swapping one Kyle Phillips links-style layout for another. There must be plenty of similarities.

As Carlota easily did best of the Europeans, she looks good each-way value at 33-1 in a market headed by American bomber Lexi Thompson, who was cruelly robbed of this year's first Major, the Inspiration.

While coasting to a wide-margin victory, she was retrospectively penalised four shots for a minor rules infringement the previous day but not reported at the time. Thompson took it on the chin and fought her way to a playoff with Ryu, only to be beaten at the first extra hole.

Her length will be an asset when the weather turns nasty but her putting stroke and nerve under pressure is unconvincing and preference at the prices is for Volvik winner Shanshan Feng and Amy Yang, who dotted up in Thailand at the start of the year.

Feng led the US Open after three rounds and was value for more than her fifth place there as she had a putting meltdown on the final green when, trying for the eagle that would have put her in a playoff, she ran up a triple-bogey eight.

Yang plays tough courses well and is 8-4-8 for the first three Majors. She doesn't always finish off tournaments as well as she should but is as good as any of them n her day.

Fellow Korean In Gee Chun, four times second but no wins in a frustrating year, loves the Majors - she won the Evian last year and the US Open in 2015 - and looks best of the rest, along with veterans Inbee Park, Stacy Lewis and Cristie Kerr.

Weather forecast A wet week with Friday's rain the heaviest. Sunday is likely to be the only dry day. Wind at 16mph, temperatures around 17-18C.

Course overview Opened in 2000 and regarded as Kyle Phillips' greatest creation. This modern-day links was added to the courses used in the Alfred Dunhill Links Championship from 2001. It has three doglegs in the first half-dozen holes. The sixth is driveable for the longer hitters. The 12th, long and dramatic, and the short 15th over a rocky inlet are the most memorable.

Type of player suited to challenge Never intended to be wildly difficult, it favours golfers who are good at keeping the ball down in the wind.