Dutch ace's surprise loss to Clayton means he is under pressure 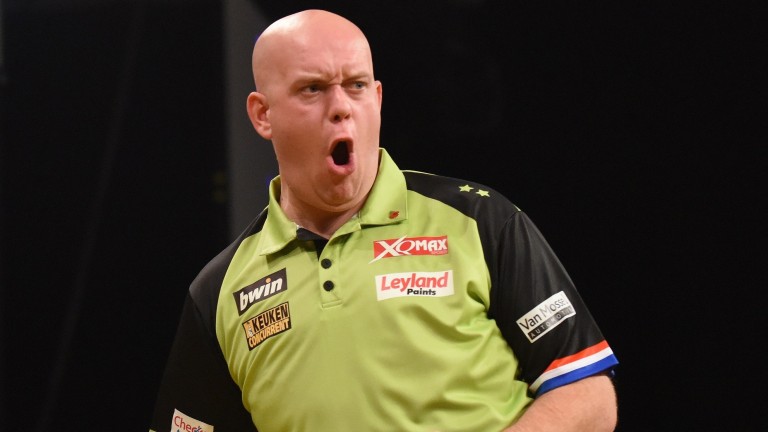 We could see something special from Michael van Gerwen
Christopher Dean / Scantech Medi
1 of 1
By Steve Davies 8:00PM, NOV 12 2018

Michael van Gerwen's defence of the Grand Slam of Darts is on the line in Wolver­hampton when he takes on Joe Murnan knowing he may need to win to stay in the tournament.

Van Gerwen's shock 5-4 loss to Jonny Clayton on Sunday means his qualification for the last 16 still needs securing, although it's hard to see him slipping up against Murnan.

Suitably riled and against a player who has already been beaten twice, that's the cue for a Mighty Mike masterclass.

The Van Gerwen to win the match, hit most 180s and land the highest checkout treble is an odds-on shot but the evens with Sky Bet that the Dutchman wins 5-1 or 5-0 is a better bet.

Van Gerwen boasts the scoring power – he averages 25 points more than Murnan over the first two Group A games – and the finishing clout – a 46 per cent checkout rate compared to Murnan's 25 per cent – and basically has an over­whelm­ing edge all round.

They've met five times before and Van Gerwen has won the lot.

James Wade, unlike Van Gerwen, was one of three players over the weekend to book their place in the knockout stages having won their two group openers, and the in-form Machine is expected to make it three out of three against fellow leftie Mark Webster.

However, it's easy to envisage this clash being closer if only because Webby has looked solid enough in his two Group C contests.

Webster's problem is that he has been missing too many doubles – nine out of 13 in a 5-4 loss to Keegan Brown, ten out of 13 in a 5-3 defeat to Wesley Harms, a match in which he had arrers at a double in every leg.

Wade, like Brown and Harms, is unlikely to let the Welshman off if his outer-ring woes continue with Webster set for a clean sweep of narrow demises.