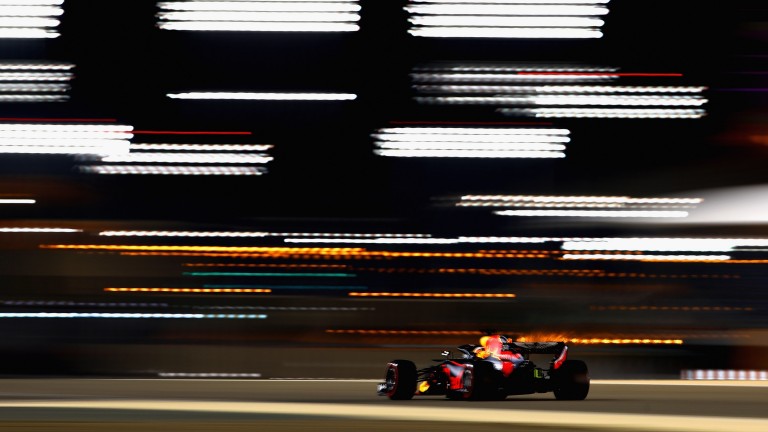 Daniel Ricciardo in action under the floodlights during qualifying
Clive Mason
1 of 1
By Adam Scriven 4:40PM, APR 8 2018

Sebastian Vettel has a golden opportunity to dramatically extend his early world championship lead in the Bahrain Grand Prix, but bookmakers may have overreacted in making him a long odds-on favourite for the race.

The Ferrari driver, who had a chunk of good fortune when winning in Australia, will start from pole position while championship favourite Lewis Hamilton begins only ninth after a grid-drop penalty for a gearbox change.

The Italian team have set the pace this weekend, with Kimi Raikkonen topping two of the three practice sessions. The Finn, who starts seconds, may act as tailgunner for Vettel in the race, but there is no guarantee the German will be able to run and hide.

Long-run pace in practice suggested Mercedes, for whom Valtteri Bottas lines up third, should be closer to Ferrari than they were in qualifying trim.

But both teams may face extreme pressure from Daniel Ricciardo's Red Bull, which looked to have the advantage over a long distance during practice.

Tyre management may play a role during the desert race and this year's Red Bull has already shown its strength at keeping its rubber fresh.

Ricciardo set the fastest lap of the race in Australia by almost half a second on tyres which were 18 laps old.

A grid penalty in Melbourne prevented Ricciardo from showing his true form, but a decent start from fourth on the grid in Bahrain could bring the Aussie right into play.

Max Verstappen in the other Red Bull starts down in 15th after crashing in qualifying.

The fiery Dutchman should provide plenty of entertainment as he attempts to recover at a track where overtaking should be easier than in Melbourne.

However, he ruined his own race there by overdriving and he could be a risky bet in the top-six finish market.

Vettel did not have a trouble-free day on Saturday, with some bodywork coming loose in third practice and his session ending early with electronic issues.

The Ferrari is also thought to have higher fuel consumption than its rivals, which could prevent him running at full speed if there is no safety car.