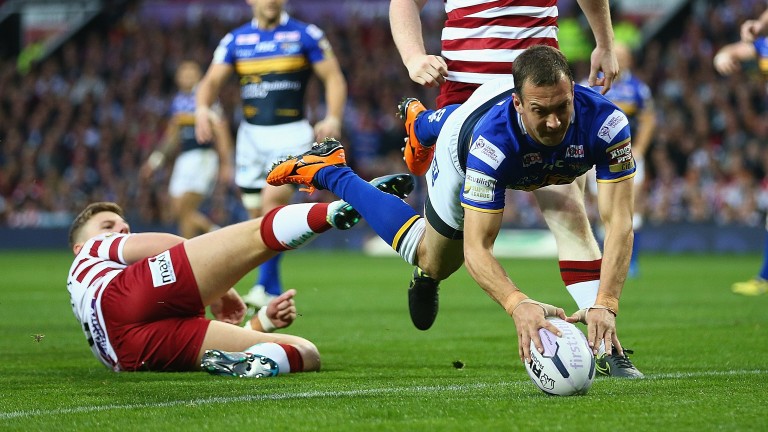 It's the busiest night of the Betfred Super League season so far with five fixtures on what looks like a tricky card for punters.

The live TV offering comes from the Halliwell Jones Stadium where Warrington, the only winless side in the competition, host Leeds.

The Rhinos know exactly how the Wolves are feeling. Last season, Brian McDermott's side made an awful start and never really recovered.

Among the darkest days in a dreadful year for Leeds was the 52-18 hammering suffered at Warrington.

The Rhinos are 5-4 to avenge that defeat and that looks a fair price bearing in mind they've won their last four games.

The Wolves who pinched a point against Hull last time out are without injured play maker Kevin Brown and while they must win eventually, it may not be this game.

Leeds captain Danny McGuire makes his 400th appearance for the club and may be worth backing at 16-1 to attract a sentimental vote as man of the match. On-song hooker Matt Parcell is also worth an interest.

Saints have lost hooker James Roby to a knee injury and with the Giants welcoming back string-puller Danny Brough from a ban, they could stay within a 14-point buffer.

Widnes won their first game of the season last weekend at Leigh. The return of Tom Gilmore from injury made a difference and he may be joined by Joe Mellor who is set to make his first appearance of 2016.

Wakefield haven't won a Super League home game by a double-digit margin for almost a year so the Vikings are a decent proposition with a ten-point start.

Hull are tasked with conceding a converted try to Salford as third meets fourth at the KCom Stadium.

That looks a fair assessment but Leigh to give up two points at home to Catalans could be the best bet of the night.

The Dragons haven't won in five matches while the Centurions are boosted by the return of Glenn Stewart against his old club as they bid to bounce back from the surprise loss to Widnes.