Resurgent Stanley should go down a storm at Southwind

Scott can also have a great tournament 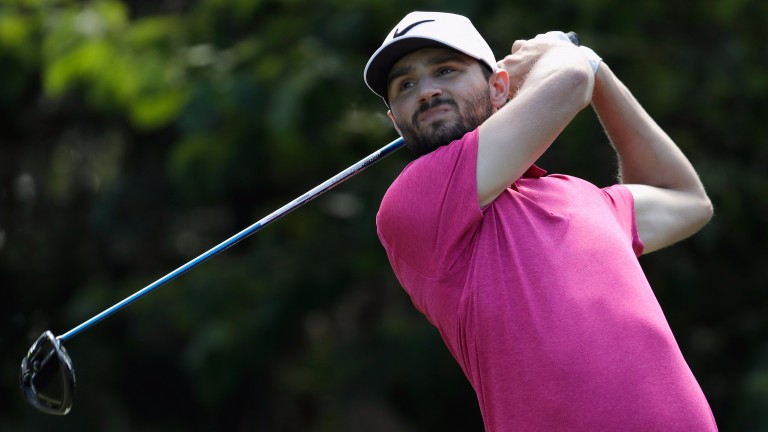 Palmer's top tip
Kyle Stanley 33-1
The US Open next week will demand supreme ball-striking from those who tee up at Erin Hills, but the St Jude Classic this week will not serve up many easy birdies either.

Solid tee-to-green work is the key to success at the tight, par-70 TPC Southwind in Memphis, which traditionally provides a stiff test in baking temperatures. For the next fortnight, punters should be following players who are swinging well, and few on the circuit are in a better groove than Kyle Stanley.

With a 30th birthday looming in November, Stanley is enjoying a US Tour resurgence, having finished eighth in the Houston Open in April, fourth in the Players Championship, and sixth in the Memorial on Sunday.

The 2012 Phoenix Open champion looks ready to win again.
TPC Southwind seems a perfect venue for Stanley to showcase the crisp hitting which has seen him finding greens in regulation for fun over the last few months.

The Washington man sensing this great opportunity is probably the main reason why he skipped US Open qualifying on Monday, allowing him time to rest and concentrate on preparing properly for the St Jude Classic.

Stanley has failed to make an impact in four previous St Jude starts, but he has never arrived in form. This time he is hitting his ball as well as anyone else in the field and appears a surefire contender with a half-decent week of putting.

Next best
Adam Scott 14-1
Scheduling changes mean Adam Scott plays the week before Majors this year, the Australian ace seeking to hone his game for the four biggest events on the calendar. Winning form would do Scott more good than anything else going into the US Open – he has gone 15 months without a victory – and a focused, professional performance can be expected in Memphis.

It is significant that Scott is employing Steve Williams as caddie for a three-week stretch, which started with the Memorial. Scott brings in Williams for the biggest events and is clearly eager to head to the second Major of the season with a strong St Jude effort behind him.

Scott reported his practice form in the build-up to the Memorial as the best it had been all season and his second-round 66 was his lowest round of the year.

He took a three-shot lead into the final round at TPC Southwind in his only previous St Jude Classic appearance before finishing seventh. Returning a decade later as a Major champion, he could easily avenge that sorry Sunday.

Other selection
Billy Horschel 33-1
There was a lot to deal with for Billy Horschel in the wake of his AT&T Byron Nelson victory last month. His wife revealed her battle with alcoholism and much media interest followed. A share of 34th place on his Colonial debut and a missed cut by two shots in the Memorial was understandable.

Expect Horschel to rediscover his sparkle at TPC Southwind, where his solid ball-striking has yielded some excellent results. The 2014 FedEx Cup champion has finished tenth, sixth and eighth in his three most recent St Jude starts.

With confidence and swagger returning to the step of Horschel, who is only 30 and has four US Tour victories under his belt, he can churn out greens in regulation at Southwind and contend again for the title on Sunday.

Others to note
Seung-Yul Noh
The Korean has finished third and seventh the last two years, but he withdrew from Colonial after a first-round 76, and after a 70 in the Memphis US Open qualifier on Monday. He will be dangerous if he is fit.

Daniel Berger
The defending champion has been inconsistent this term, adjusting to new equipment and suffering some injury niggles. Talented and difficult to dismiss.

Rickie Fowler
The world number nine was finding fairways with ease at Muirfield Village last week, finishing tied for second. He is desperate to make a Major breakthrough and may struggle to focus on St Jude.

Brooks Koepka
The Floridian slugger has proven himself at TPC Southwind, with a scoring average of just over 68. Has been playing well over the last two months.

Phil Mickelson
Lefty stunned the world by announcing he will miss the US Open to attend the high-school graduation of his daughter. He is now focused on Southwind, where he has placed in three of the last four years.

Charl Schwartzel
The 2011 Masters champion withdrew during the Byron Nelson last month with a wrist injury, but it was not serious. A class act in a weak field.

Course overview The Ron Prichard-designed TPC Southwind has hosted this event since 1989, but the track had an extensive overhaul after the 2004 staging.

All the greens were reconstructed, with bermuda grass replacing bentgrass, while fairways were narrowed and new tees added to increase the yardage.

The three ponds at the course were enlarged, 125 trees were planted, 15 bunkers were added and the toughened-up layout, which boasts ten water hazards and 94 bunkers, has ranked as one of the most difficult on the US Tour since.

The 485-yard par-four fifth is a devil of a hole, usually averaging well over par. The par-three 11th draws comparisons with Sawgrass's 17th, requiring a flick of the wrists with a short iron to a small island green. The two par-fives (third and 16th) are relatively straightforward and provide relief during a challenging assignment. The second and 15th also represent great birdie opportunities

Type of player suited to challenge TPC Southwind has traditionally been the domain of dead-eye drivers and precision operators.

Since the course changes, Justin Leonard (twice), Jeff Maggert, Woody Austin and Brian Gay, all accurate short-hitters, have won this event, and even prior to the modifications the likes of David Toms and Bob Estes thrived at Southwind.

It is a tight, fiddly, dangerous venue where straight hitting is essential. Aggressive players can triumph, as shown by Daniel Berger last year, but generally this is a layout where conservative golf is effective