Renaissance of Chelsea man is a story to savour 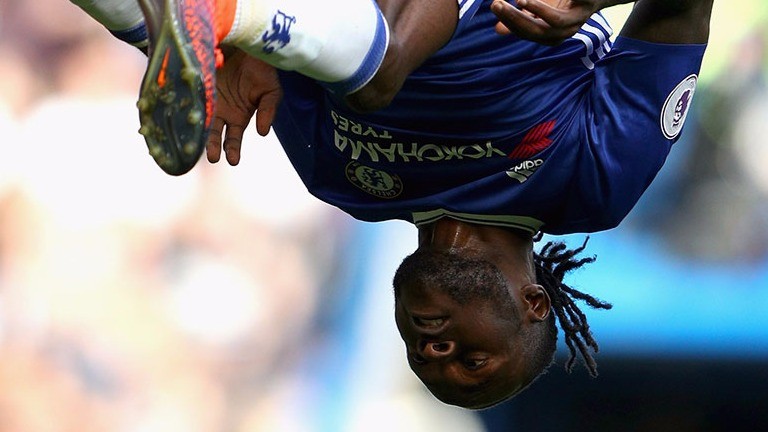 Victor Moses has been flipping brilliant for Chelsea this season
Getty Images
1 of 1
8:00PM, DEC 7 2016

Fourteen games gone, 24 to go, and my man of the Premier League season as things stand is a player who was a big price to have been anything other than a strictly peripheral figure when battle commenced in the summer.

The second coming of Victor Moses is a truly heartwarming story as well as a surprising one and long may it last.

When he was 11 he returned from a kickabout in the streets of his home city of Kaduna in Nigeria to be told that his parents had been killed as a consequence of religious conflict.

Within a week he had been flown to south London to live with foster parents. The only link between his old life and his new one was football and Moses quickly came on to Crystal Palace’s radar as his talent shone on the park pitches where he played.

He was sent to Whitgift School, whose football coach was – and still is – former Chelsea defender Colin Pates.

Pates, in conjunction with the Palace coaches, nurtured and developed this special talent and it was not long before Eagles fans began to hear tales of a potential future star in the junior ranks.

He made his Palace debut at 16 and became a first-team regular in no time, but when the club went into administration two years after his breakthrough he was sold to Wigan for a ludicrously cheap £2.5m.

Moses progressed at the Lancashire club but his international career with England stalled when Stuart Pearce constantly declined to select him for the Under-21s, causing him to decide to represent Nigeria instead.

Roberto Di Matteo was keener on Moses than Pearce had been and the then Chelsea manager paid £9m for him at the start of the 2012-13 season.

But Di Matteo was gone within weeks and Moses’s upward trajectory plateaued as a consequence, with

Rafa Benitez and then Jose Mourinho preferring others, thus forcing him to become one of the club’s many loaned players.

He saw action at Liverpool, Stoke and West Ham, never enjoying particularly significant success at any of the clubs, and when Antonio Conte arrived at Stamford Bridge before the current season there was no indication that he was any nearer to fulfilling his abundant potential than when he first signed for the Blues.

But Conte, as we are now well aware, is a smart operator and as he waited to introduce his preferred 3-5-2 formation he spotted that the fringe winger could be the answer in the right wing-back position.

Having been used as substitute in Chelsea’s first few games, Moses was given the roving role on the right flank when Conte switched to a back three and he has been on the winning side in each of his last eight appearances, quickly establishing himself as a fans’ favourite with his energised performances.

There is no point playing wing-backs unless you have proper ones and Moses looks born to the role. He gets up and down impressively, defends like a tiger and offers a huge threat going forward.

His ability to arrive late and unmarked has given Chelsea’s attacks an added threat and his mantelpiece is groaning under the weight of a flurry of man-of-the-match trophies.

It is wonderful to see this teenage starlet go on to show what he can do at the highest level just when it looked as though he would fall just short of top class.

What Moses has achieved should inspire many players who feel frustrated at halted progress and should also encourage managers to make every effort to get the most out of their existing resources before reaching for the cheque book.

Chelsea may well keep marching all the way to the title, although it appears too competitive to be able to assume that, and their new system, while looking flawless for much of their recent winning streak, has been shown to have its vulnerabilities against Tottenham, who are my idea of the best value to win the Premier League at 22-1 as things stand.

But regardless of where they end up, the Blues are a far more likeable club these days. Conte’s arrival is a big part of that but so too is the rejuvenation of Victor Moses.

Boxing buffoons bringing nothing to the table

THE latest example of the woeful state of boxing came yesterday as a fighter whose name I can’t even be bothered to look up chucked a table, which may or may not have been made of actual wood, in the vague direction of his upcoming foe.

There ensued a lot of pushing, shoving, liberal use of the c-word and, off camera, the sound of promoters and broadcasters rubbing their hands in glee at the thought of thousands of sad mugs being so aroused by the press conference dust-up that they vowed to cough up the necessary sum to watch the two boxers get it on in the ring.

Sky, the aforementioned broadcaster, seemed to take a vastly different view of the embarrassing scene than they might if they weren’t the ones charging people to watch the fight itself.

There was a distinct lack of disgust or outrage from the channel in their reporting of the pathetic incident despite them regularly rushing to the moral high ground to apologise on behalf of any sportsman who dares to say anything stronger than ‘wee-wee’ in the course of going about their business.

It would be safe to assume the tone of the reporting would have been somewhat different if, say, Arsene Wenger had suddenly picked up a table and launched it at Jose Mourinho.

Why case for safe standing has legs

When your opinion is as wrong as mine tends to be you get used to performing U-turns, and now I am backtracking on something about which I never believed I would waver.

It is always a pleasure to tick off a new ground and on Saturday I made my debut at Brunton Park to see Carlisle lose to Rochdale in the FA Cup second round.

A nice ground in a residential setting rather than wedged between a carpet superstore and a field, Brunton Park has a smart new stand down one of the long sides and a rickety old one opposite, comprising seating at the back and a paddock in front, where on Saturday one could stand for £15.

I’d forgotten how much I liked standing to watch football.

Both teams tried to knock it about well, particularly Rochdale, whose manager Keith Hill deserves a chance at a higher level, and Carlisle showed enough in defeat to suggest they will give me a decent run for my money in the League Two title battle at 14-1.

And as I made my way out into the chilly Cumbria evening it dawned on me that maybe all fans should be given the option to stand up if they so desire.

Having experienced the mayhem of going to football in the 1980s I had spent the last quarter of a century believing the Taylor report’s recommendation that stadia in the top division should offer only seating was the best thing that could have happened to the game. I still do.

I used to think calls for the return of terracing were misjudged and largely attempts to make those that issued them look like ‘real’ fans.

But now it may indeed be safe to trial standing areas for a number of reasons, principally that football has changed since there was an urgent need to modernise grounds and outlaw terracing in order to limit the movement of large groups of blokes who wanted to kick off.

Far fewer fans are there for the aggro and so it is probably safe to enable those who want to stand to do so.

It is also increasingly the case that supporters are standing anyway even when they are supposed to be sitting down. This is causing problems for those who want to stay seated and still see what’s happening, so if those who seek to be upright are given a place to do that there could then be zero tolerance to standing up in the seated areas.

Most of all, though, something needs to be done to encourage youths to return to watching football and this might be what helps to make that happen.

It is currently too expensive for most groups of lads to go to football together, but if lower-cost standing tickets were available the threat of a lost generation of fans, something the game is in grave danger of failing to recognise, would be eased.

If the trials proved unsuccessful we could return to where we are now, but things have moved on from the dark days of the 1980s and it no longer appears reckless to consider offering people the chance to stand and watch football.