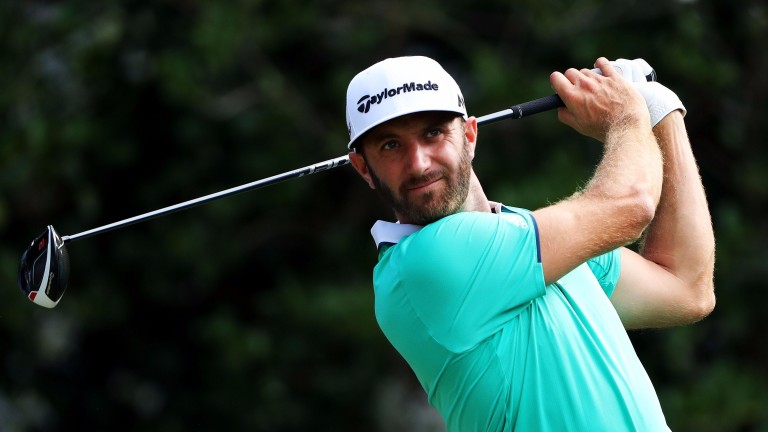 Dustin Johnson has been scrambling well in Hawaii
Richard Heathcote
1 of 1
By Steve Palmer 1:38PM, JAN 7 2017

Two players who spent the end of the last US Tour season battling for a Ryder Cup wildcard place are tied at the top of the leaderboard in the SBS Tournament of Champions in Hawaii.

Ryan Moore, who got the nod from US captain Davis Love for a Ryder Cup debut, is 12 under par through 36 holes and alongside Justin Thomas, who narrowly missed out on a place in the triumphant American side.

The Plantation Course at Kapalua is softer than usual due to heavy December rain, and powerhouse Thomas has been loving the conditions. The ante-post 22-1 chance is 9-2 favourite. Moore, 28-1 before play started on Thursday, lacks length off the tee but has been hitting his wedges close. Moore is 5-1, the same price as Patrick Reed, who shares third spot with Jimmy Walker.

Reed arrived late in Hawaii due to illness, but he hit 18 greens in regulation for the first time in his career in a second-round 65, missing just one fairway. The Texan has finished first and second in this event the last two years.

Ante-post favourite Hideki Matsuyama is three shots behind, alone in sixth place. Defending champion Jordan Spieth made nine birdies in a second-round 69 which featured a double-bogey at the eighth and a triple at the 17th.

Spieth is seven shots off the pace. Two players have come from seven shots back at the halfway stage to win at Kapalua – Sergio Garcia in 2002 and Stuart Appleby in 2005 – but Spieth can be backed at 40-1. Dustin Johnson is two shots closer to the lead, alongside world number one Jason Day at seven under.

The action starts earlier today, with the first group out at 6.35pm UK and Ireland time (8.35am Hawaii). The final twoball of Moore and Thomas is off at 9.05pm. Third-round twoball punters are pointed towards a possible double on Matsuyama and Johnson.

Matsuyama is in ridiculously good form and can be fancied to outscore Jason Dufner in the 8.45pm match. Matsuyama has won four of his last five tournaments and finished third in his only previous Kapalua appearance. Aside from a double-bogey at the 17th in round two, the Japanese star was immaculate again on Friday.

Johnson has not been hitting his approaches close enough over the first two days to make many birdies, but he has dropped a shot on only one of his 36 holes and will be greatly encouraged by the quality of his chipping. With his short-game clearly in good order, expect DJ to step up a gear in round three to leave playing partner William McGirt well behind (8.05pm).