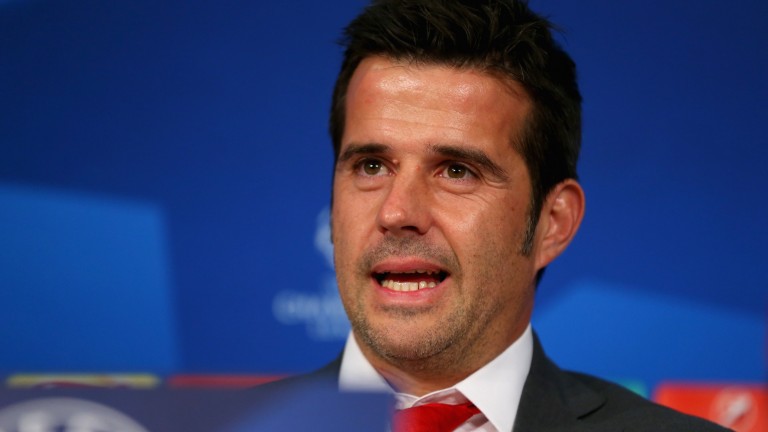 Olympiakos boss Marco Silva could be on his way to Hull
Alexander Hassenstein
1 of 1
By Dan Childs 8:04PM, JAN 6 2017

Hull parted company with Mike Phelan on Tuesday and the task of reviving the Tigers’ Premier League fortunes may fall to Portuguese manager Marco Silva, who has been heavily backed to fill the vacancy.

Phelan’s departure was announced at almost the same time as Swansea completed a 2-1 victory at Crystal Palace – a result that sent Hull to the foot of the league table.

The next Hull manager market was initially headed by Gary Rowett, who shortened to a low of 1-3 with Sky Bet.

However, the 39-year-old Silva, who has managed Estoril and Sporting in Portugal and Greek side Olympiakos, was all the rage yesterday and bet365 slashed him from 6-4 to 1-4 before suspending betting.

Bookmakers’ reaction to the news from Hull was mixed. Hills responded by easing the Tigers’ relegation odds from 1-6 to 1-5 but most firms took the opposite view. Betfred cut them to 1-10 to go down (from 1-6) and Ladbrokes went 1-9 from 1-7.

Phelan’s dismissal was a blow to punters who had backed Watford’s
Walter Mazzarri to be the next top-flight manager to leave. Mazzarri’s injury-hit side put in another poor performance in a 2-0 loss at Stoke on Tuesday and have shortened to 7-1 for the drop.

Watford have not been slow to change managers recently and expectations of another sacking are once again high with Mazzarri the 5-6 favourite to be the next managerial casualty.

Swansea’s new boss Paul Clement was at Selhurst Park on Tuesday to watch his team’s victory. The Swans climbed to within one point of safety and are 4-7, from 1-3, to finish in the bottom three.