US Open champion is on a roll 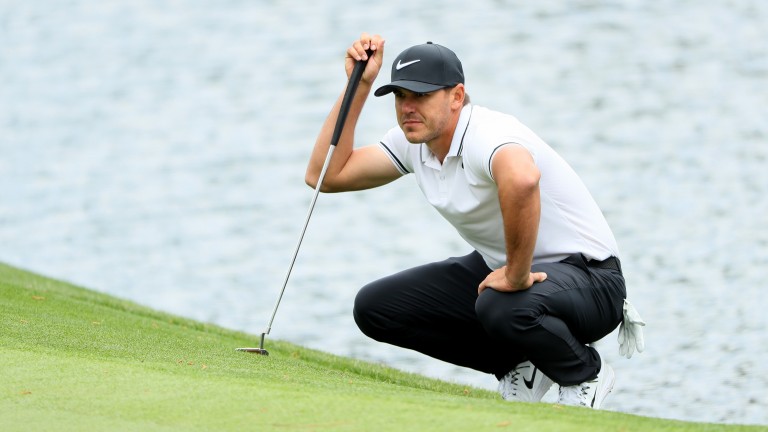 The WGC-Bridgestone Invitational is a cracking betting heat – only 76 runners yet standard each-way terms offering five or six places – and the US Open champion represents excellent value.

Dustin Johnson did the US Open and Bridgestone double last year, and Brooks Koepka looks to have every chance of repeating the feat.

Koepka appears to have taken his game to a new level and can land a maiden WGC title as a result.

The 16-under-par destruction of Erin Hills and four-shot victory was a masterclass from Koepka, and he took a month off to celebrate his Major success, holidaying in Las Vegas and hardly touching a club.

He jetted to Royal Birkdale for the Open full of rust, but still managed to contend, highlighting his new-found assurance.

Koepka tied for sixth place at Birkdale and his long-game has become solid enough for him to be a major player on difficult courses.

The powerhouse throttles back on holes where fairway-finding is essential and his course-management skills have improved through his mid-20s.

Firestone Country Club, home of the Bridgestone, is an extreme ball-striking assignment, based on a series of immense par-fours, and few in the field this year can approach the tee with as much confidence as Koepka.

He finished sixth on his Bridgestone debut in 2015, carding four rounds in the 60s, then was forced to withdraw after 13 holes with an ankle injury 12 months ago.

Open champion Jordan Spieth turned 24 last Thursday and has been partying with the Claret Jug. A stiff driving test is not ideal for him this week, and the youngster is entitled to let his mind wander forward to the opportunity of achieving a career Grand Slam next week.

Spieth is an unattractive favourite, while Rory McIlroy will probably need time to adjust to life without caddie JP Fitzgerald. It seems McIlroy's best man, Harry Diamond, is set to replace Fitzgerald for this week and next.

Diamond runs pubs in Belfast, which means McIlroy is essentially going alone into two of the biggest tournaments of the season, making him vulnerable until he recruits a professional caddie.

The pride of Japan continues to suffer a lack of respect in outright markets and Hideki Matsuyama must be in the staking plan as he tees up in his favourite American state. Ohio is where he made his Presidents Cup debut in 2013 and where he won his first US Tour title in the 2014 Memorial.

Matsuyama was world number two until Spieth won the Open, and hotshot Hideki also impressed at Birkdale, sharing 14th place. He tied for second in the US Open and must be considered whenever the circuit heads to tough tee-to-green layouts.

Firestone fits that category and Matsuyama's humdrum form figures there (21-12-37-42) are an anomaly, likely to be swiftly rectified over the coming years.

He is 13th on the US Tour for total driving and tenth for greens-in- regulation, long-game solidity which lends itself to Firestone.

Ohio is a relatively short trip by American standards for Marc Leishman, who is based in Virginia, and the Australian enjoys going there. Like Matsuyama, he made his Presidents Cup debut in 2013 at Muirfield Village, and his last three Memorial starts have yielded finishes of fifth, 11th and 15th.

Leishman was third behind McIlroy and Sergio Garcia in the 2014 Bridgestone, and returns this year a more confident and complete player.

His driving and putting has never been better, and he has finished fifth and sixth in his last two starts, enjoying a magnificent nine-under-par Open weekend. His first daughter arrived last month and Leishman is bursting with happiness and purpose.

Complete your each-way attack with two outsiders who should out-perform their odds. Kyle Stanley is swinging superbly this season, churning out greens in regulation, and he landed an overdue second US Tour title in the Quicken Loans National a month ago.

His only previous Firestone spin yielded 16th place (2012) and this track looks perfect for the 29-year-old Washington man to show off his long-game class.

Stanley has shone in the Memorial on another difficult Ohio track – finishing third in 2013 and sixth in June – and his Open missed cut is easy to forgive. The 11-1 about a Stanley top-ten on Sunday is well worth considering.

Louis Oosthuizen also seems a big price. There was much to like about the way the South African was performing in the first half of the year, particularly third place in Phoenix and second at Sawgrass, and he was exuding long-game control.

Oosthuizen did not seem to prepare properly for the Open – a Twitter video of him casually hitting balls at his farm did not inspire confidence in the week prior – and his first missed cut of the year resulted.

Expect a more determined effort for the Bridgestone, as Oosthuizen seeks a long overdue Stateside triumph. He was ninth on his Firestone debut in 2010 and fourth in 2012.

Others to note
Dustin Johnson
The world number one and defending champion appears to be slowly but surely getting back to his best, and is the most appealing of the front three in the betting.

Thomas Pieters
The Belgian bomber possesses all the tools to become a Firestone champion at some stage in his career, but a debut victory may be asking too much.

Jon Rahm
The Spanish youngster is also making his Bridgestone debut. Talented enough to overcome the handicap, but no value to do so.

Rickie Fowler
The world number 11 has been consistently producing good golf, tied for second in the 2011 Bridgestone, and is another obvious danger to the selections.

Course overview Opened in 1929 and redesigned by Robert Trent Jones ten years later, the South has hosted all but two of the World Series of Golf tournaments, which became World Golf Championship events in 1999, first as the NEC Invitational and then, from 2006, the Bridgestone Invitational. The 2002 event was at Sahalee Country Club in Washington. The South is an immensely long par 70, with seven of the ten par-fours measuring more than 450 yards apiece. The 526-yard par-five second is the most obvious birdie chance on the layout. The fifth, seventh and 15th are all testing par-threes of more than 200 yards. The greens a smallish and Bentgrass.

The story of last year Dustin Johnson followed up his US Open triumph by beating another elite field, firing a pair of weekend 66s to beat Scott Piercy by a shot.

Weather forecast Thunderstorms are expected over the first two days, before a calmer weekend. Light breezes throughout, peaking on Friday

Type of player suited to challenge Length off the tee is an advantage on a series of gruelling par-fours, as underlined by Firestone champions like Tiger Woods, Vijay Singh, Adam Scott, Keegan Bradley, Rory McIlroy and Dustin Johnson. This is an all-round test but one where powerhouses can flourish.