United have excellent record in recent enounters with City 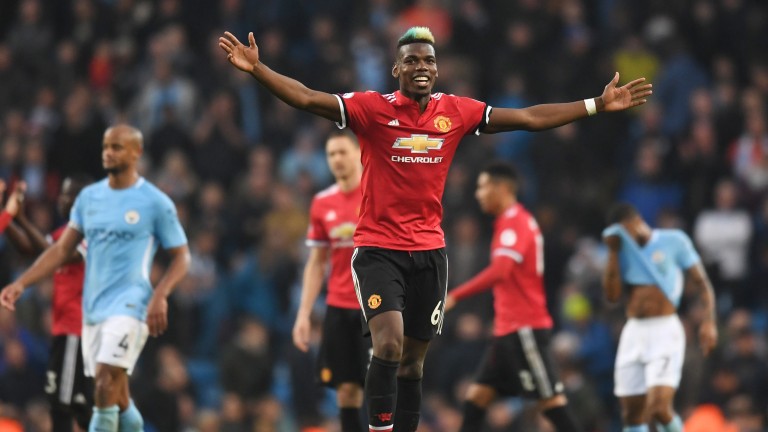 Manchester United have lived in Manchester City's shadow in the last few seasons but every team has their price on any given day and the Red Devils look too big to triumph at the Etihad.

United have performed well in tough away games at Chelsea, drawing 2-2, and Juventus, winning 2-1, and are hard to ignore at their biggest ever price to win a Premier League game.

Head-to-head statistics are not always the greatest barometer but they can matter more in derbies because they impact on players' psychology.

In the case of the Manchester clubs, recent results favour United who have won four, drawn two and lost two of the last eight meetings.

They have tasted victory over City in each of the last four seasons, including the astonishing encounter in April this year when they came from 2-0 down to win 3-2.

To achieve a similar outcome United need to play well and ride their luck but, crucially, they possess the mental strength required to give them a genuine chance.

They were given little hope of beating Juventus on Wednesday but approached the task with a positive mindset and matched their hosts in an even first half.

After half-time they were forced onto the back foot but it took a stunning Cristiano Ronaldo goal to break the deadlock and United responded superbly in the final ten minutes.

Fortune was on United's side but they showed ambition by loading the penalty box when many other teams would have settled for a point and they could have won by a wider margin had Marcus Rashford showed more composure in injury-time.

The win put United on the brink of qualifying for the Champions League last 16 and they are in a healthier position in the Premier League after taking ten points from their last four games.

They need to get closer to the top four but talk of a crisis has faded and Jose Mourinho has eased to double-figure quotes in the betting on the next manager to leave.

Mourinho's long-term future could be thrown back into doubt by a poor performance and a heavy defeat against City but there is also pressure on the hosts, who are expected to win at a canter.

City are a frightening proposition when everything clicks and they have been irresistible in their last two matches, winning 6-1 at home to Southampton and 6-0 against Shakhtar Donetsk.

The feelgood factor increased a little more when Raheem Sterling signed a new five-year contract on Friday, citing his eagerness to continue working under Pep Guardiola.

Sterling is just one example of a player reaching new heights under the guidance of arguably the best coach in world football.

Guardiola's thirst to keep on improving should deliver plenty more trophies and the club's status as odds-on title favourites is well-deserved.

However, even City can have the occasional off-day, and their easy recent successes might not be the best preparation for a contest that is likely to be far more demanding.

City have had some memorable victories over United in the modern era, beating them 6-1 at Old Trafford in October 2011 and 4-1 at the Etihad in September 2013, but they have never battered them during the Guardiola era.

Guardiola's two victories over United have been by a single goal and he would no doubt settle for another narrow success.

United's priority will be to stay in the game for as long as possible and prey on City's nerves.

They haven't lost to City by more than one goal in the last nine meetings and the trend of close encounters is likely to continue.

Manchester United
Romelu Lukaku (hamstring) could return to contention and no fresh injuries are reported.