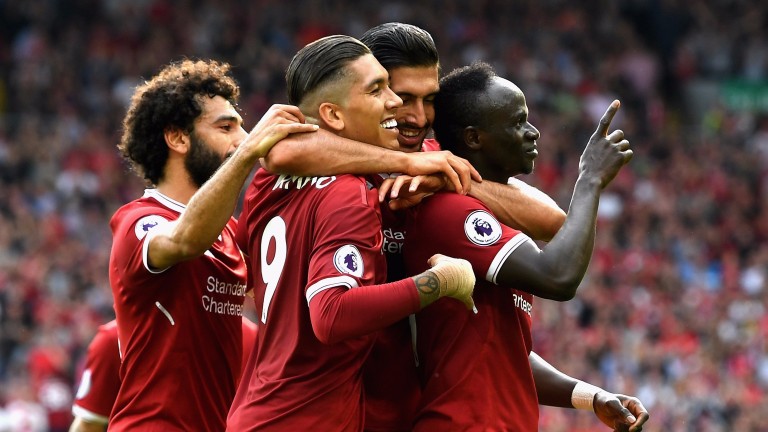 What’s your best bet of the weekend?

Andy Brassell European football expert Bayern Munich to win at Hoffenheim. I don’t buy into the theory Bayern have made a bad start – they have won both Bundesliga matches and the German Super Cup – and were well in control even if the goals came late at Werder Bremen last time out. Hoffenheim are still pulling themselves together after losing in the Champions League and selling Sebastian Rudy and Niklas Sule to Bayern.

Joe Champion Racing Post Sport tipster I expect Wolves to return to winning ways with a home victory against Millwall. They’ve spent big over the summer and immediately justified the hype with three opening wins but have slipped up since against decent sides in the shape of Cardiff and Brentford. They’re clear title favourites for a reason and should bounce back.

Steve Davies Racing Post Sport tipster Charlton seem to have clicked this season and can extend Southend’s away-day woes. Southend kicked off their League One campaign by beating Blackburn but they haven’t picked up another victory and conceding five at Rotherham and three at Gillingham is worrying. The Addicks, with Ricky Holmes on fire and plenty of options up top, could fill their boots.

Didi Hamann Ex-Liverpool midfielder Bournemouth or draw double chance at Arsenal. Arsene Wenger’s men are in a downward spiral and it has reached crisis point. Teams can lose matches but it’s the manner of their defeats which is so shocking. They have the power to batter anyone but right now you wouldn’t trust them very much and you certainly wouldn’t want to be on them at short odds.

Chris Pender Ladbrokes odds-­compiler Reading are unbeaten in their last 15 league and cup games at the Madejski. Having added more firepower in Sone Aluko, they should have too much for a Bristol City side yet to win on the road in the league.

Which team are the most vulnerable favourites?

Andy Brassell Marseille look short for their home game with Rennes. I was at their last home game and there is a lot of pressure on the team when things don’t go well, while the atmosphere will not have been helped by a 6-1 thrashing at Monaco and a bland ending to the transfer window. Rennes have spent plenty of money and have decent talent in their squad.

Joe Champion Southampton haven’t started well and I can see them slipping up at home to Watford, who have improved under Marco Silva. The Saints’ only victory came against a West Ham team who were reduced to ten men after 33 minutes and even then Mauricio Pellegrino’s side needed a late winner. They look far too short.

Steve Davies Luton look too short against Swindon, who are going to get stronger after a moderate start. The Robins look pretty decent on the road – they’ve won their two away games at Carlisle and Morecambe – and are the only team to have taken points off high-flyers Exeter. The Hatters put eight past Yeovil on day one, but Swindon are far sterner opponents.

Didi Hamann Chelsea at Leicester. Chelsea have bounced back from the Burnley setback with a pair of good wins against Spurs and Everton, but I’m not convinced by them. They got away with a lot last term and that’s not going to be happening this season, and I’ll certainly be passing up odds-on quotes away at teams as competent as Leicester.

Chris Pender Manchester United. This could be an ideal time for Stoke to play Jose Mourinho’s men, following the international break. United have struggled at the Britannia in recent years and Mark Hughes’s men will look to frustrate and disrupt once again, while playing without fear as they look for a repeat of their win over Arsenal.

Andy Brassell I am not convinced by either side defensively but at the prices I will take a chance on Liverpool and their speedy front three of Salah, Firmino and Mane. I don’t think City have made enough changes at the heart of their defence, where relying on Vincent Kompany for leadership is just asking for trouble.

Joe Champion Vincent Kompany could miss out for City and that would be a big boost for Liverpool. The Reds have an excellent record against the best teams in the league, as they showed when demolishing Arsenal prior to the international break. Their fluid attack has the ability to exploit any gaps in a shaky City defence and they look value for victory.

Steve Davies With so much attacking zest in each side and question marks defensively, both teams to score looks obvious but it’s priced accordingly. Both teams to score and over 2.5 goals at 4-5 might be a solution. It’s hard to see City losing – the way they rallied after a poor first half to come back to deny Everton was impressive.

Didi Hamann I’d probably say City. There’s loads of firepower on offer so there should be goals but I’m still not sure that Jurgen Klopp has got the balance right at Liverpool. The transfer window was an opportunity to sort out weaknesses in defence and central midfield which he didn’t do. City’s relentless attacking should eventually wear them down.

Chris Pender Neither manager will be looking forward to this match. Jurgen Klopp and Pep Guardiola will be hoping that their star players return from the international break without any injuries. Due to the lack of preparation on the training pitch I can see this game ending in a draw as both teams look to cancel each other out, while not wanting to lose.

Who wins the Champions League?

Andy Brassell Real Madrid can complete the hat-trick – I don’t think they have reached the limit of their potential just yet and the favourites are in line for an era of dominance. They have already planned for after this current crop have finished, with the likes of Marco Asensio, Marcos Llorente, Dani Ceballos and Mateo Kovacic ready to come in.

Joe Champion There’s no reason to think that Real Madrid, who became the first team to retain the title in its current guise, can’t secure a historic treble. Zinedine Zidane has kept the core of his squad together and recruited some exciting young talents. Isco has come of age and Marco Asensio is developing into a real star.

Steve Davies After successfully defending the title, Real Madrid can follow that up by completing a hat-trick. Everyone’s getting understandably excited by what’s happening in Paris, but Real have the class, the experience, the match-winners and have kept together a team who look to be at their absolute peak.

Didi Hamann Paris St-Germain have been learning their trade in this competition over the past couple of years and realised they’ve been a couple of match-winners away from competing with the very best. Now, with Neymar and Kylian Mbappe, they’ve got players who can turn ties. At a bigger price, I’d also be looking at Juventus each-way.

Chris Pender Juventus. Having come up just short last year, the Old Lady will be looking to go one better. Having managed to keep Paulo Dybala, and with the additions of Blaise Matuidi and Douglas Costa they look to have a squad capable of lifting the trophy in May, in what is surely Gianluigi Buffon’s last chance.

Give us a tip for matchday one of the Champions League

Andy Brassell Atletico Madrid draw no bet at Roma. I don’t see Atletico losing this match because Roma look unfinished after the transfer window closed. They have not signed a direct replacement for Mohamed Salah and I don’t quite see where Patrik Schick fits into the team.

Joe Champion Juventus or draw double chance against Barcelona. The Bianconeri stopped Barca from scoring at home and at Camp Nou in last season’s quarter-finals. They’ve lost key players but have at least signed replacements while the Catalans’ transfer policy has been widely criticised and they’re not certain to record a victory.

Steve Davies Sevilla +1 at Liverpool. The Reds are feeling very good about themselves after impressive efforts against Hoffenheim and Arsenal, but this is a far more demanding test. Sevilla are also unbeaten this season and saw off an impressive Istanbul Basaksehir in the playoffs. Sevilla are a solid side with excellent recent European pedigree, as Liverpool know only too well.

Didi Hamann A lay of Spurs at home to Dortmund. Tottenham haven’t settled at Wembley, that’s obvious, and it’s got to be a blow that Dele Alli is suspended. Dortmund have started the season seriously well with a couple of clinical wins against Wolfsburg and Hertha. Pierre-Emerick Aubameyang is in the goals and Dortmund will be delighted to have kept hold of him.

Chris Pender Dortmund +1 away to Tottenham. Spurs will be without the influential Dele Alli, and Dortmund will look to take advantage in what is a difficult group for both teams.

Will Arsenal and Everton qualify from their Europa League groups?

Andy Brassell Yes. Even if Arsenal put out a half-and-half team or maybe League Cup side they should still progress, particularly as I don’t see where the goals will come from for Cologne. It’s a trickier draw for Everton in with Lyon and Atalanta but the Italians are maybe being rated on last season’s side which has been weakened over the summer with key departures.

Joe Champion Yes. Arsenal always managed to get out of their Champions League group and they’re pitched into a weak section on their first foray into Europa League football. They should have no issues but Everton will find it tougher. Lyon and Atalanta are strong sides but the Toffees have signed well over the summer and should escape, although they might not do so as group winners.

Steve Davies I have absolutely no doubt that Arsenal will win Group H and would expect Everton to accompany Lyon out of Group E. It won’t, however, be easy for the Toffees. Apollon, especially at home, will be a test – the Cypriots have already won three at home. And Atalanta, dubbed Italy’s Leicester after making the top four, may not have the depth of last season and have sold key players, but you wouldn’t take them lightly.

Didi Hamann Yes. This is where Arsenal will be seen at their best, in games against the likes of Bate and Red Star, who they can just bully. Everton face a far sterner challenge with Lyon and Atalanta in their section but you get the sense that as all their new players gel they are going to become a very decent team, at home and in Europe.

Chris Pender Yes. Arsenal and Everton should have enough to navigate safely through the test. With the added incentive of a Champions League place for the winners, this is a competition that both teams should be trying to win.