Kiev hero Gareth Bale 6-4 to remain at the Bernabeu 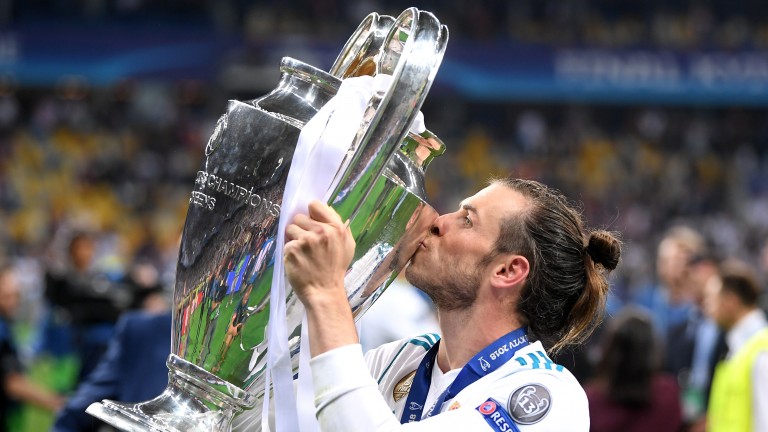 Real Madrid won the first five editions of the European Cup with no team managing more than three in a row since those early days but Zinedine Zidane's hat-trick heroes have a chance to make more history and are 7-1 with Hills to continue their Champions League domination next season.

Real's 3-1 final victory over Liverpool in Kiev landed the threepeat, but 6-1 Manchester City and 13-2 Barcelona are seen as more likely to lift the trophy in Atletico Madrid's stadium next season.

Substitute Gareth Bale, with a sensational overhead strike and another goal given a huge helping hand from Liverpool's shell-shocked goalkeeper Loris Karius, decided the final with a match-winning performance that is sure to have given a timely nudge to his Premier League suitors.

Bale hinted his future could lie away from the Bernabeu and bet365 rate the Welshman a standout 6-4 to remain in Madrid after the summer transfer window with Manchester United heading the chase should the 28-year-old head out of Spain.

United, as short as 6-4 but 11-4 with Hills to tempt Bale to Old Trafford, while a return to Tottenham is 7-1 and Betfair rate Chelsea 16-1 despite suggestions he could be used as a makeweight in any Real Madrid negotiations for Eden Hazard.

Real's squad seems certain to undergo surgery this summer despite winning three Champions Leagues in a row after Zidane's side finished tailed off in third spot in La Liga with Robert Lewandowski, Neymar and Hazard among those linked with the club.

This Champions League triumph owed plenty to good fortune along the way and even Cristiano Ronaldo, the Golden Boot winner once again, hinted he may exit the club, although some have suggested that was an attempt to steal the limelight away from Bale's heroics.

Bale's jaw-dropping acrobatic finish is 8-11 with Hills to win the Puskas award for the goal of the year with Ronaldo's similar strike against Juventus in the quarter-finals at 7-4 with any other goal 4-1.

The second Bale effort won't win any awards but will feature on blooper DVDs, much like Karim Benzema's opener as Karius gifted Real Madrid two goals.

Between Karius's horrendous errors there had been time for Sadio Mane to equalise, but having started brightly Liverpool were soon rocked by Egyptian king Mohamed Salah's first-half shoulder injury which disrupted Jurgen Klopp's energetic outfit and sent a nation into World Cup panic mode.

It remains unclear whether Salah will be fit enough to participate in Russia next month but so crucial is he to Egypt's prospects that some bookmakers have suspended betting on their group which also contains Uruguay, Russia and Saudi Arabia.

Egypt have drifted to 13-2 with Betway to top Group A with Uruguay and Russia understandably cut.

Paddy Power have pushed the north African outfit out to 9-5 to qualify for the last 16 and Betway refunded all Champions League final bets involving Salah (up to £20) after his match was cut short.

Once the tears have been wiped away, Salah's sensational 44-goal season offers hope in the disappointment for Liverpool supporters that the good times may soon return to Anfield, particularly with midfielder Naby Keita already signed up for next term.

Hills make Liverpool 11-1 to go one better in the 2018-19 Champions League, although defeat in the final means they will provisionally be in the third pot of seeds for the group-stage draw, with Tottenham up to second thanks to Madrid's triumph.