Real and Dortmund make it hard for Spurs 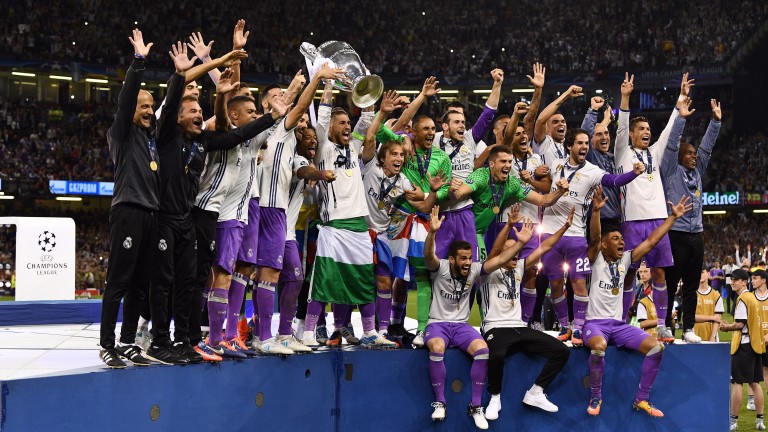 Real Madrid
The holders' hex has been broken.

Champions League winners had looked cursed the following season but Real Madrid became the first team in the current era to successfully defend the crown and are favourites to become the first team since Bayern Munich in the mid-1970s to complete a hat-trick.

Zinedine Zidane's side, who also went on to win La Liga, started their European campaign slowly and finished only second to Borussia Dortmund in the group stage, but they scored 20 goals in seven knockout ties against Napoli, Bayern Munich, Atletico Madrid and Juventus.

The 4-1 demolition job on Juve in the final was a joy to behold and Cristiano Ronaldo's double in Cardiff propelled him to the leading goalscorer above Lionel Messi for good measure.

Ronaldo came alive with hat-tricks against both Bayern and Atletico but this was a team effort. Casemiro was superb as the midfield anchor, Isco sparkled at the head of Zidane's diamond and Marco Asensio performed the super-sub role perfectly.

Real remain the team to beat.

Borussia Dortmund
Of all the teams who exited the Champions League last season none had a legitimate excuse as strong as a Borussia Dortmund team who were quite rightly horrified by the bombing of their team bus prior to their quarter-final first leg against Monaco.

It was a disgrace that Dortmund were asked to play the tie 24 hours after the initial postponement and in the circumstances they did well to lose only 3-2 before another defeat at Monaco.

Boss Thomas Tuchel had been at odds with the board and some of his players even before that incident and it became clear there would be a summer parting of the ways even though Dortmund recovered to finish third and win the German Cup.

Peter Bosz, the man who led Ajax to the Europa League final, replaced Tuchel, but he must do without Ousmane Dembele who signed for Barcelona.

However, Andrei Yarmolenko, Max Philipp, Mahmoud Dahoud, Omer Toprak and Jeremy Toljan appear decent recruits and Dortmund are as dangerous as ever with 31-goal Pierre-Emerick Aubameyang.

Tottenham
Tottenham made an early exit from last season's Champions League and their difficult draw means Spurs could be taking another scenic route back into the Europa League.

Spurs were favourites to top their group last term but six of their seven points came against basement boys CSKA Moscow and Monaco and Bayer Leverkusen both won at Wembley.

Mauricio Pochettino could point to the key absence of influential centre-back Toby Alderweireld and two-time Premier League Golden Boot winner Harry Kane through injury for both matches against Leverkusen, although the Spurs boss also needs to take his share of the blame.

Qualification was still possible heading to Monaco when Poch foolishly decided to rest Kyle Walker, Jan Vertonghen and Christian Eriksen even though Alderweireld was already sidelined.

Pochettino did not have the squad to absorb that amount of rotation last season but the sale of Walker has seen Fernando Llorente, Serge Aurier and Davidson Sanchez arrive to improve the depth. However this group is red-hot.

Apoel Nicosia
Cypriot champions Apoel are set for the tour of a lifetime visiting Europe's finest stadiums with trips to the Bernabeu, Wembley and Westfalenstadion, but it gives them an almost impossible talk of going further in the Champions League.

Georgios Donis - yes, the one who used to play for Blackburn - took over the managerial reins from new Leeds boss Thomas Christensen and the main objective for the season was accomplished with three qualifying victories over Dudelange, Viitorul and Slavia Prague.

Only one goal was conceded in those six ties, although extra-time was needed to see off Viitorul and Donis will need to find a new source of goals following Pieros Sotiriou's sale to Copenhagen.

Sotiriou scored 21 league goals last season to finish second in the A Katigoria Golden Boot pecking order behind Matt Derbyshire - yes, the one who used to play for Blackburn - and the threat is likely to be posed by 34-year-old Brazilian-born Belgian Igor De Camargo.