Rotterdam crowd in for a treat as Barney takes on MvG 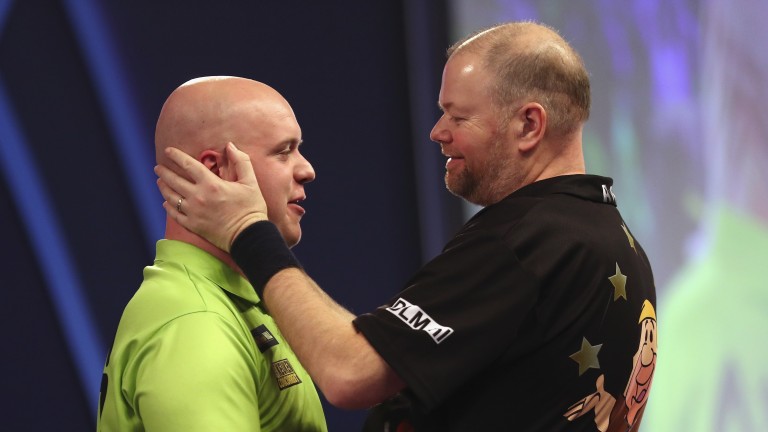 Rotterdam brought out the best in Raymond van Barneveld on Wednesday night and the Lowlands legend can give compatriot Michael van Gerwen a battle in a match the whole of Holland will want to see.

It’s part two of the Dutch double-header from Rotterdam's Ahoy Arena and there’s no doubt which showdown will top the bill in this darts-mad city.

Barney certainly felt at home on Wednesday when a fiercely partisan crowd inspired him to a much-needed 7-3 win against Simon Whitlock.

Whether he’s got the game to beat Mighty Mike is questionable but he is capable of taking four legs off Van Gerwen, who produced too many slack darts at bad times in a shock 7-5 loss against Peter Wright on the first night of the double-header.

Star of the show on night one was Gary Anderson with two wins out of two and he should be able to take care of Daryl Gurney, although it’s worth pointing out that there’s nothing between them in the head-to-heads and they drew 6-6 earlier in the campaign.

A couple of 180s surprises could well be sprung by Anderson – who is 6-4 to hit more maxes against Superchin – and also Simon Whitlock in the night’s opener against Michael Smith.

Smith has hit 24 180s in 11 matches, which is certainly a long way short of the number he’d have had himself in for. Whitlock, meanwhile, has hit 30 in 11 games.

So odds of 2-1 about the Aussie in a 180s match bet has to be the way to go. Smith may well need three or more to stop the Aussie from copping and he’s done that only once in his last six Premier League appearances.