Ravens equipped to stay in touch

Patriots have plenty of thinking to do 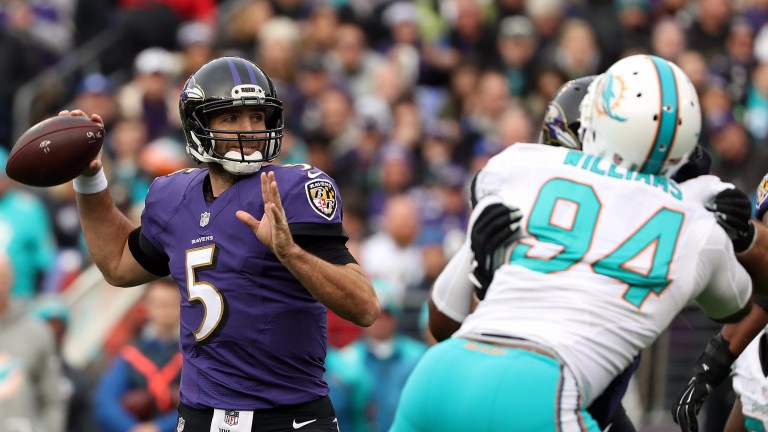 A look at the standings in the AFC East would suggest everything is going to plan for New England.

A 10-2 record might imply they are well on their way to winning the division and will soon be able to turn their attention towards a bold Super Bowl push.

However, they have to cope with the absence of tight end Rob Gronkowski, the best player in that position in the league, for the rest of the campaign and that is something Baltimore are capable of exploiting.

Patriots quarterback Tom Brady has produced great things with unfamiliar receiving options before, but Gronk has always been his go-to man and while they recovered from a Week Ten defeat to Seattle by beating San Francisco, the New York Jets and Los Angeles, they would have expected to win those matches.

The Ravens' defence was ranked as the best in the league before Week 14 and John Harbaugh's team look to be coming good at just the right rime.

They have conceded fewer than 14 points in four of their last five games and the offence, under the direction of quarterback Joe Flacco, got into gear last week with their best performance of the campaign in a 38-6 victory over Miami.

Flacco may look to exploit deeper options after their success last week and the Patriots are further troubled by the strength of their opponents' defending against the run.

It would be straightforward for Brady to heavily utilise running back LaGarrette Blount, who led the league with 13 rushing touchdowns going into Week 14.

However, he could be frustrated by a defence who have conceded an average of just 73.8 rushing yards a game and the league-best 3.4 yards per carry.

Those statistics cannot be ignored by the Patriots and while Brady and coach Bill Belichick are the masters of adapting gameplans, the Ravens are capable of at least staying in touch.

Team news
Baltimore
Offensive back-ups Crockett Gillmore, Lorenzo Taliaferro and Michael Campanero are all missing but no starters are on the injury report.

New England
Tight end Rob Gronkowski is out for the season with a back injury, while wide receiver Danny Amendola and tight end Michael Williams are both sidelined. Tight end Martellus Bennett and receiver Matthew Slater are rated questionable.