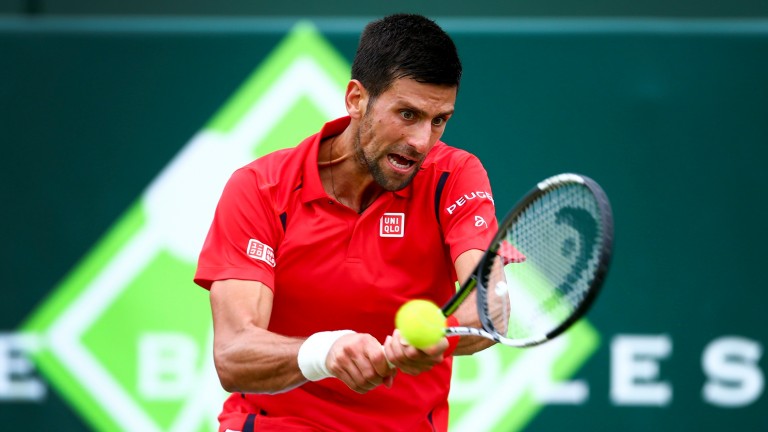 Milos Raonic eased to a straight-sets win against Gael Monfils on Sunday evening and the giant Canadian could spring a surprise when he faces Novak Djokovic at the O2 Arena.

Djokovic had to work hard to overcome Austrian Dominic Thiem in his ATP World Tour Finals opener and the Serbian – who has struggled with injuries in the latter part of the season – will not find Raonic easy to stop.

The Canadian fired down 12 aces as he obliterated Monfils on Sunday, conceding no break points and bettering his opponent in crucial phases of the match.

He put pressure on the Frenchman’s second serve – winning 52 per cent of points – and will do likewise against Djokovic, who was less than impressive against Thiem, who was a bag of nerves on his Finals debut.

The Austrian needed seven points to take the first set in a tiebreak before his challenge faltered as Djokovic regained his composure and confidence to win 6-7 6-0 6-2. He will not be gifted as many chances on Raonic’s serve.

Raonic has never beaten Djokovic in seven attempts but – with the former world number one low on confidence – this might be his best chance to claim a famous win.

Thiem appeared to put all his energy into that first set against Djokovic before his capitulation and the 23-year-old may be facing another defeat against Monfils in the afternoon match.

Thiem just about scraped into the World Tour Finals following a series of lacklustre displays. He has won four titles this year but the last of those was on grass at the Stuttgart Open in June.

While there is more to come from the Austrian on all surfaces, he did so much in the summer that the end of year has looked like an afterthought.

After spectacularly blowing a lead against Djokovic, Thiem has to lift himself and that won’t be an easy task against a seasoned campaigner like Monfils.

The pair have met only once, when Thiem triumphed on his favoured clay. Monfils is a solid hard-court performer, however, and he should have the edge in this must win clash.

The Japanese star – a 10-11 shot to open his Finals campaign with a victory – avenged his US Open semi-finals defeat with a 6-2 6-3 demolition job.