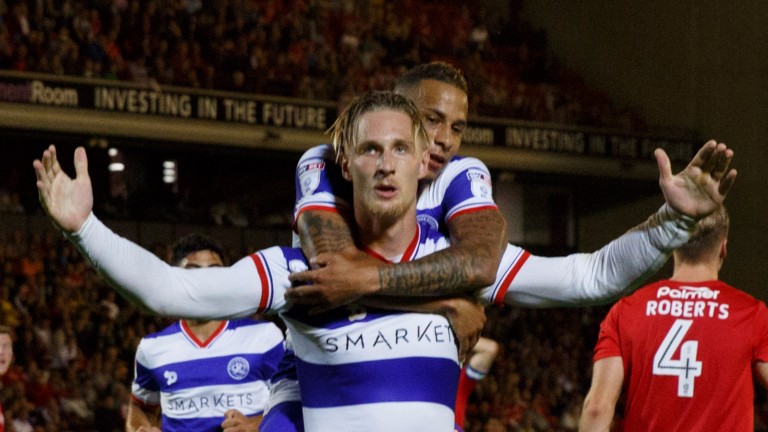 Sebastian Polter of Queens Park Rangers celebrates after scoring a goal to make it 1-2
Robbie Jay Barratt/AMA
1 of 1
By Dan Childs 8:04PM, NOV 30 2016

Ian Holloway has got off to mixed start in his second spell as QPR manager, winning one and losing one, but he has the majority of supporters on his side and his positive approach can produce a victorious performance against Wolves at Loftus Road.

Wanderers also opted for a change of direction during the last international break with Paul Lambert replacing caretaker-manager Rob Edwards, but he has so far failed to turn things around and Wolves’ winless run now stretches to nine games.

Lambert is trying to put his own stamp on the Black Country club and he appears to be unimpressed by some of the summer signings sanctioned by their wealthy owners.

Prince Oniangue, Romain Saiss and Silvio have not been given
any minutes by Lambert so far and Joao Teixeira and Ivan Cavaleiro have had to be content with substitute appearances.

Lambert inherited a side which had not kept a clean sheet in nine games and has focused on trying to shore up the Wolves defence.

Wolves
Danny Batth is available after a one-game ban but Joao Teixeira is suspended. Mike Williamson, Michal Zyro and Jordan Graham are out long term

He did that immediately with a 0-0 draw at Preston but his cautious tactics contributed a 2-0 loss at home to Sheffield Wednesday last Saturday.

The balance of the team may have shifted too far and an overly defensive-minded Wolves could play into the hands of QPR, who are showing greater attacking intent since Holloway’s arrival.

One of Holloway’s first decisions was to get two strikers – Conor Washington and Sebastian Polter – into the team and he was instantly rewarded when both men scored in a 2-1 triumph at home to Norwich.

Last weekend’s 3-0 loss at Ipswich was a setback, although the contest was tighter than the score suggests and the outcome was in the balance until a goalkeeping howler from Alex Smithies handed Ipswich their second goal.

After the game Holloway refused to lay the blame at the door of Smithies and warned his players to toughen up.

However, those comments are unlikely to precede a sudden shift in approach and the most likely tactical change is the return of Australian international midfielder Massimo Luongo, who missed the Ipswich game through illness.

Luongo will give QPR better control of possession but their most likely match-winner is Dutch attacking midfielder Tjaronn Chery, who is capable of brilliant goals and defence-splitting passes.

Chery has created 55 chances in the second tier this season – eight more than any other player – although his vision is not always complimented by the quality of his teammates’ finishing.

However, Polter and Washington should be feeling more confident after scoring so early in Holloway’s reign and there is enough quality in the QPR attack to find a way through a limited Wolves side.