Rampant Reds should narrow gap on Chelsea to three points 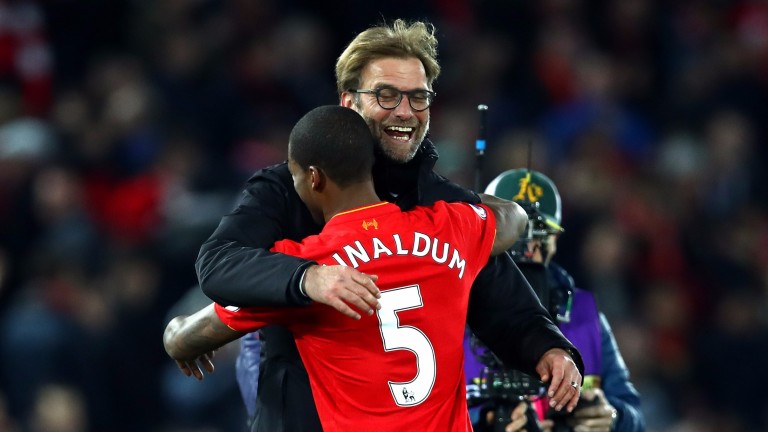 Everton v Southampton
Everton boss Ronald Koeman takes on his former club and could not have asked for any more help from the fixture list. This will be Southampton's third game in six days and, following home defeats to Tottenham and West Brom, visiting gaffer Claude Puel has said he will be making changes. Among those to miss out will be suspended star Virgil van Dijk and this is a good chance for Everton to cement seventh spot.

Man City v Burnley
It won't be a simple task lifting the Manchester City squad after their 1-0 defeat at Anfield on Saturday but Pep Guardiola has resources that opposite number Sean Dyche can only dream about. City's attacking prowess should be too much for Burnley, who have been dismal on the road. However, Andre Gray has four goals in his last two matches and the Clarets are not without hope of grabbing a consolation.

Burnley
Dean Marney is suspended but Jeff Hendrick is back from a ban. Jon Flanagan is doubtful.

Key stat
Burnley have collected one point from eight away games

Sunderland v Liverpool
Liverpool have been gifted a superb chance to narrow the gap on Premier League leaders Chelsea to just three points and they should take it against the beleaguered Black Cats. Battered 4-1 at Burnley on Saturday and called "useless" by their manager David Moyes, Sunderland are ravaged by injuries which leaves the spine of the team even weaker than usual. If Liverpool are at their best they can win well.

West Brom v Hull
Backing a team on the road who have lost their last five away matches to nil is always a dodgy proposition but Hull are not without a chance at the Hawthorns. The extra day of rest having played on Friday could come in handy and Mike Phelan's side have shown a more positive attitude in recent matches that could at the very least see them notch against a West Brom side who have scored ten times in their last four home games.