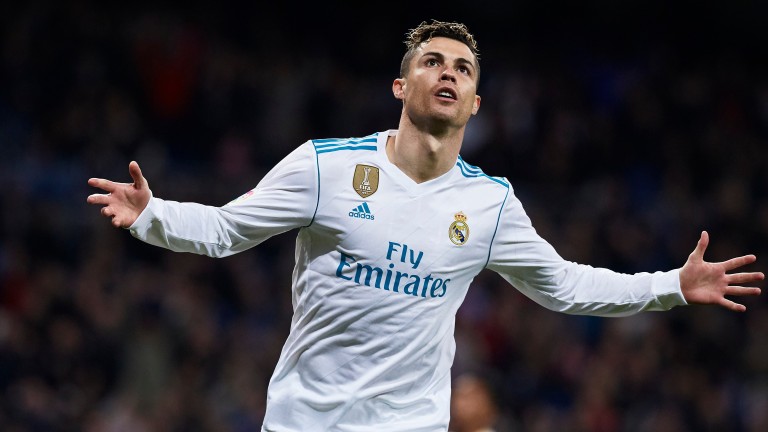 Cristiano Ronaldo and Juventus both have the number three on their mind at the Bernabeu, where Real Madrid are long odds-on to march into an eighth straight Champions League semi-final.

Three’s the number of goals which Juventus need – as a bare minimum – to make a game of a quarter-final which looks way beyond them following their 3-0 home drubbing by the mighty Merengues last week.

Three is also the number of goals which Ronaldo needs to match his own record of Champions League goals in a single campaign.

Given the state of the tie and the form of the Real frontman, the latter scenario is the more likely to occur.

The man is simply on fire and punters looking for a bet in a tie which as a contest appears to be over, might as well home in on him.

As a measure of quite how lethal Ronaldo is this season, try this stat: Each of the eight quarter-finalists has failed to score in at least one of their previous group and knockout ties. Unlike Ronaldo.

Yes, what clubs can’t do, he’s managed on his own with nine games played by the Portuguese ace and at least one goal in every single one of them. He’s got 14 so far, needs three more to hit his personal best of 17 and, given how much he craves records and stardom, you can rest assured he’s got his sights sets on becoming the first (and almost certainly last) player to score in every Champions League match in a single season.

That makes him dangerous and as he has scored in each of his last ten games for the Madrid side, it’s understandable why he’s 4-6 to score at any time.

But the 5-2 that he scores the last goal of the game is far more appearling. He will be straining every sinew to get on the scoresheet, surely won’t be taken off given that Real have little to play for domestically at the weekend, and he’s copped for last-scorer backers four times during the European campaign already.

What Juventus wouldn’t give for a marksman of Ronaldo’s quality. Their best is Paulo Dybala, a classy finisher in his own right with 25 goals this term and in good form having bagged a hat-trick in Saturday’s 4-2 win at Benevento. However, he’s suspended.

This is as close to mission impossible as it gets. Real haven’t failed to score at home in a Champions League tie for seven years and, presuming they extend that record, that means Juve need five, and you can pretty much forget that. Three’s probably beyond them.

If Zinedine Zidane’s men simply try to go through the motions and Juve get no joy in the first half, the match could easily fizzle out.

That, though, is not how the layers see it given a quote of 6-4 under 2.5 goals. Both teams scoring is a 7-10 shot. The bookmakers anticipate action and if Ronaldo, given his own agenda, is busting a gut then maybe that will prove infectious.

Real are unbeaten in their last 18 home Champions League matches and would want to preserve that record though they have kept only once clean sheet in their last 11 in front of their own supporters.

In contrast, the Bianconeri have kept clean sheets in ten of their last 13 away games and, given that there's little tension following the first leg, they do have pretty much a free shot tonight with expectations low.

Juventus
Top scorer Paulo Dybala and midfielder Rodrigo Bentancur are suspended. Miralem Pjanic and Mehdi Benatia are available after bans. Benedikt Howedes is not in the squad and striker Federico Bernardeschi crocked.