Rampant Rams ready to get back on track against Philadelphia

Injuries are adding up for the Eagles 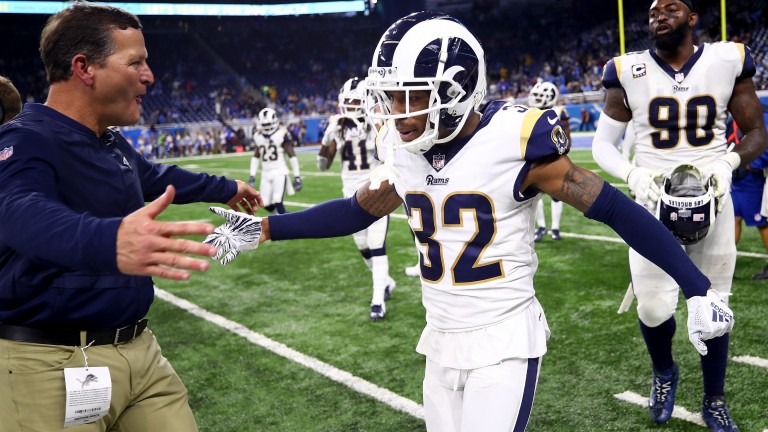 Troy Hill of the LA Rams celebrates on the sidelines after intercepting a Detroit pass
Gregory Shamus
1 of 1
By Phil Agius 8:00PM, DEC 15 2018

Los Angeles Rams froze in chilly Chicago last week but the former Super Bowl favourites should get back on track with a big win over the champions back in California.

The Eagles have a host of defensive injuries and will also be without starting quarterback Carson Wentz. He has a stress fracture of the back and reports suggest that he could miss the rest of the season.

Nick Foles is set to start and as replacements go, the player who was MVP of last season's Super Bowl is not bad.

But the Eagles' results under Wentz and Foles over the last two seasons have shown that it was the overall strength of the team that was behind their success last year, not the quarterback play.

Both players shone last season and both have struggled this time - Foles started the first two games while Wentz recovered from a knee injury.

The Rams should pile up the points after managing just six in Chicago. They had scored 223 in their previous six games and should get back in business with a point to prove.

Team news
Philadelphia
Quarterback Carson Wentz (back) is out, so Nick Foles starts. Linebacker Jordan Hicks, defensive tackle Timmy Jernigan, Sidney Jones and guard Isaac Seumalo have also been ruled out. Defensive end Josh Sweat and running back Corey Clement are out for the season.

Los Angeles Rams
The Rams are in good health with no players expected to miss the game.

Key stat
Philadelphia have covered the handicap in only one of their last five games.