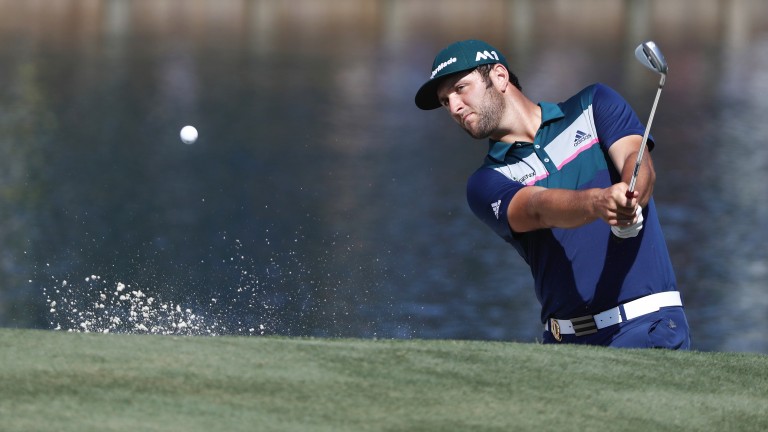 Dustin Johnson supporters endured a miserable Saturday as the world number one dropped from first place to a share of 15th after an uncharacteristically ugly display in the second round of the Dell Technologies Championship.

Ante-post 20-1 chance Jon Rahm set the halfway pace, reaching nine under par through 36 holes, leaving Johnson to play catch-up as one of the afternoon starters. The chase started well, with birdies at the first and second to get within two of the Spaniard, but from there Johnson made two bogeys on the front nine and two double-bogeys on the back-nine.

It was a curiously defensive performance from the FedEx Cup leader, who twice found the rough when taking an iron off the tee at a par-four. The driver, a club which he typically wields with more confidence than anyone, was not called into action on a regular basis.

The negative gameplan had a negative result, with Johnson drifting five shots behind. Having been 9-4 favourite after round one, he is back out to 12-1. Rahm has taken over at the top of the betting, with 11-4 the best price on offer.

Rahm has made a fantastic TPC Boston debut and will probably be tough to catch. The cocksure youngster is cruising to US Tour Rookie of the Year honours and seems likely to have eyes on the world number one ranking next season.

Johnson can be expected to shrug off his sorry Saturday and be more positive in round three. He hunted down Jordan Spieth from three behind with 18 to play in The Northern Trust last week and is obviously capable of catching Rahm from five behind with 36 to play. There are plenty of quality players between Johnson and Rahm, though, including the aforementioned Spieth.

An excellent six-under-par 65 hauled Spieth from six behind Johnson to one ahead, and Spieth goes into the weekend in high spirits. Rahm, Spieth (8-1) and Johnson are the most interesting outright runners. The weather forecast favours Rahm and Johnson, with heavy rain set to soften the course. Showers and moderate breezes are expected. The tournament finishes on Monday, which is a Bank Holiday in the United States.

The third-round threeballs card is bereft of obvious value. Morgan Hoffmann, who spectacularly found top gear with a second-round 64, is worth a small investment to beat Stewart Cink and Pat Perez in the 4.32pm (UK and Ireland time) contest.

The final threeball of Rahm, Paul Casey and Adam Hadwin is scheduled to tee off at 6pm. Thunderstorms are forecast for Boston at midnight (UK), so hopefully they will not arrive early and suspend play.