Rain and Rosberg could both threaten Hamilton 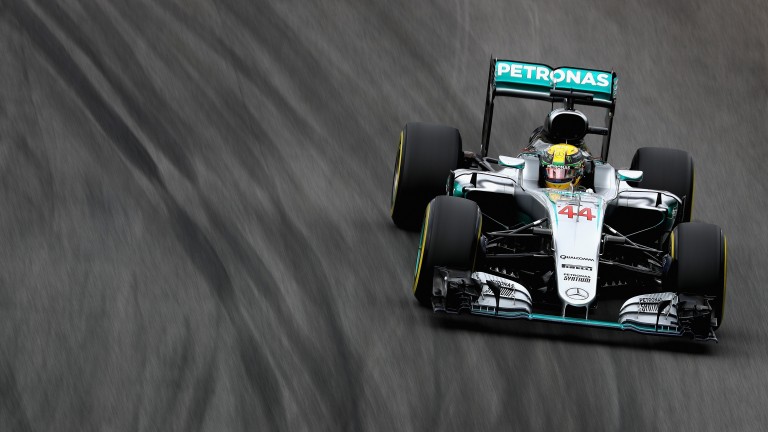 Nico Rosberg will wrap up his first world championship if he wins today’s Brazilian Grand Prix but Lewis Hamilton looks to have enough speed this weekend to take the championship battle down to the last race.

Hamilton has had the edge over his Mercedes teammate in almost every session this weekend – the German was fastest in third practice but Hamilton was quicker in both Friday sessions and all three phases of qualifying.

The British driver is 4-7 to secure the victory that would ensure Rosberg goes into the final showdown in Abu Dhabi with a lead no bigger than 12 points, or even a deficit of six if the current leader fails to score.

Hamilton will be wary of putting any points on the board just yet given that Sao Paulo is a rare venue where he has never won. He has two second places in Brazil from finishing behind Rosberg in the last two seasons.

The only time he has improved his starting postion at the track was when he qualified 17th in 2009, although grabbing pole means he doesn’t have to worry about that today. Hamilton does, of course, have fond memories of clinching the world title in Brazil in the most dramatic fashion, although he pipped Felipe Massa to the crown courtesy of a scrappy fifth place.

In 2014, Brazil was the only one of the last seven races of the year not won by the dominant Hamilton.

If the race is run in dry and stable conditions, then taking the short price on Hamilton looks fair enough. Two second places would do nicely for Rosberg.

Forecast rain has not yet had any impact on the track sessions this week, but the prospect of a wet race looks high and Hamilton cannot be backed at odds-on if there’s a chance that the race could turn into an action-packed classic. Hamilton won both this year’s wet races at Monaco and Silverstone, but if it does rain the biggest threat to the Mercedes duo should come from the Red Bulls of Daniel Ricciardo and Max Verstappen.

The Red Bull has excellent downforce levels and both drivers have the talent to make the extra grip work to their advantage.

In a dry race, Ferrari’s rejuvenated Kimi Raikkonen, a fast starter, could be in position to pick up the pieces should the top two meet trouble.

The Finn produced a stunning lap to grab third place on the grid to outqualify teammate Sebastian Vettel and has the pace to make the podium for the first time since mid-summer.

The early advice is to back a driver who might be able to make his mark whatever the conditions in Ricciardo, but Hamilton looks the pick if it stays dry.

Defining features The long flat-out blast past the stands, undulating track and sudden changes of weather. A rare left-handed circuit on the calendar.

Braking 15 per cent of lap (medium)

Wins from pole Eight in the last 20 races

Last year Lewis Hamilton spent the race unable to pass polesitter Nico Rosberg. Hamilton was forced to make a third tyre stop late in the race, mirroring his teammate’s strategy but denying him a chance to try for a strategy-based victory