Crunch clash could do right down to the wire 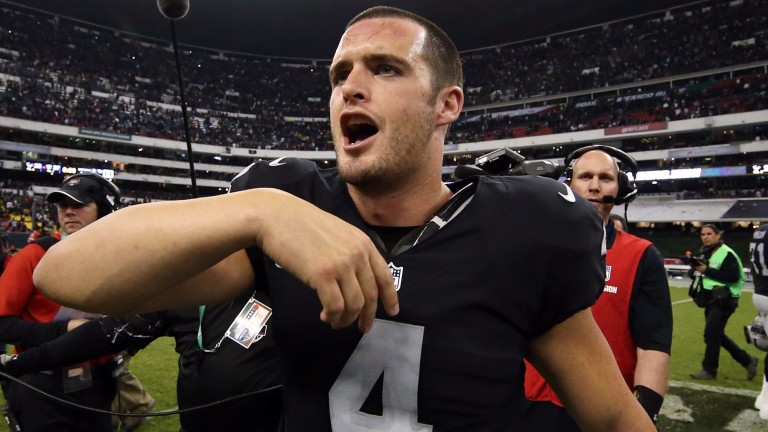 Denver threw down the gauntlet to their AFC West rivals by winning the Super Bowl in February, but Oakland and Kansas City have risen to the challenge.

Their Week 14 meeting at Arrowhead Stadium is set to go a long way towards deciding the most hotly contested division in the NFL and it would be no surprise if it went right to the wire.

Both teams will be buzzing after eventful victories on Sunday.

Oakland looked dead and buried against Buffalo and it looked as if they had fluffed their lines after an action-packed win over Carolina the week before.

But they scored 29 unanswered points to claim victory, their sixth since they were defeated by the Chiefs on their own patch in Week Six and the fifth time in that run that they have put up at least 30 points.

The good news was that quarterback Derek Carr seemed to show no ill-effects from the finger injury he suffered in the Panthers game and victory tonight would give them a great chance of winning the division for the first time since 2002.

While Oakland's progress has been spectacular, the Chiefs have ground out results - five of their last six victories have been by six points or fewer.

And many observers could be puzzled as to how a team ranked 23rd in total offence and 29th in total defence can be sitting on a 9-3 record.

The key to their success has come with turnovers as they have snared the ball from their opponents 14 more times than they have given it away, which is the best figure in the league.

In a game of small margins, this can make a huge difference, but tonight the Chiefs face a team who have a plus-12 differential themselves - six of their nine victories have come against teams with negative numbers.

And on top of that, Oakland will be charged up after losing 26-10 at home to Kansas City when their opponents were arguably fresher having come off their bye week.

So preference is for the Raiders, with their powerful offence, to stay within the handicap in a match which has huge playoff connotations.