Rahm can regain control and retain his Farmers title 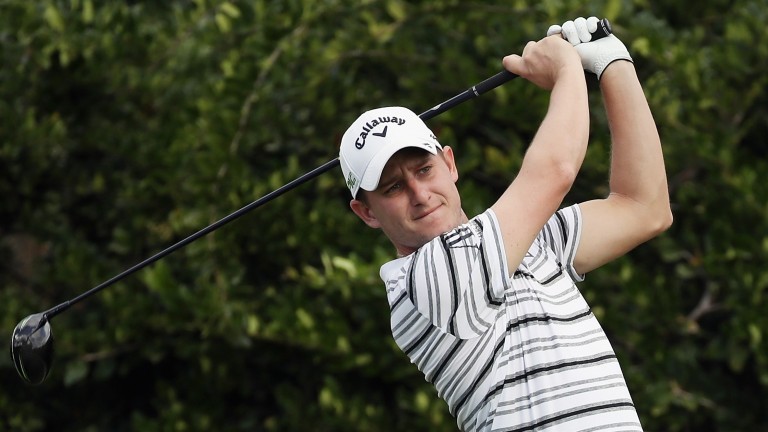 Story so far
Jon Rahm made a mess of the 18th hole in round three of the Farmers Insurance Open, leaving the tournament wide open going into Sunday at Torrey Pines South, California.

Rahm, bidding to become world number one by successfully defending his Farmers title, had put himself in a great position to make birdie on the par-five closing hole with a 319-yard drive to the fairway. For the second time this week, though, he came up short with his approach and found the greenside water hazard.

A double-bogey seven dropped Rahm to a share of 12th place and the ante-post 8-1 favourite has work to do in the final round. Alexander Noren, a pre-tournament 80-1 chance, is four shots ahead of Rahm and atop the leaderboard.

Halfway pacesetter Ryan Palmer is alone in second place, one shot behind, with local boy Michael Kim tied for third spot. Tiger Woods battled to his best score of the week, rounds of 72, 71 and 70 leaving him sharing 39th place.

Final-day advice
Farmers Insurance Open punters have an extraordinarily difficult puzzle to solve with 18 holes to go, with several players capable of lifting the silverware on a sunny day with moderate breezes.

Alex Noren, who became world number eight after winning the BMW PGA Championship last May, has finally brought some of his European Tour sparkle to the States. The cool Swede hit 17 of 18 greens in regulation in round three.

Michael Kim grew up ten minutes from Torrey Pines and the local hero is being inspired by familiar turf, while JB Holmes was a Farmers playoff loser in 2015 and also enjoys this challenge.

Beau Hossler is another Californian youngster who feels at home on this track, Gary Woodland is course-proven, Cheng-Tsung Pan tied for second last year, Tony Finau was fourth, and Emiliano Grillo triumphed on the layout as a junior.

Seven of the last nine Farmers were won by one shot or fewer (two playoffs) and with so many contenders going into Sunday, the trend seems likely to continue. Rahm and Justin Rose are the two best players on the leaderboard, but deficits of four and three shots will not be easy to overcome.

A case can be made for any of the names already mentioned, and fingers are crossed that ante-post 125-1 recommendation Pan can stay in the mix, but Rahm is arguably the best option at 12-1.

The Spaniard has probably got his bad round out of the way – sustaining a relentless gallop for 72 holes after winning last week was not going to be easy – and he could easily refocus to produce another glorious Sunday.

Rahm will probably be aware how similar a position he is in at Torrey Pines as last year. Chasing a maiden US Tour title 12 months ago, the Basque Country boy was tied for 13th place after three rounds and trailing by three shots.

This time he is parked in 12th spot, four off the pace. And, obviously, he carries much more self-belief having won twice on both the US Tour and the European Tour.

Noren has never won in the States and Ryan Palmer seems likely to drop out of things, so there is nobody too far from Rahm who he will be worrying about.

He knows a stronger start than yesterday – he was two over par through four – will allow him to quickly get back into the thick of things. The steam which was coming out of his ears after round three will have cleared and that carrot of world-number-one status guarantees 100 percent effort for the full 18 holes.

Final-round threeball punters are pointed towards Grillo, who should prove too steady for Talor Gooch and Lanto Griffin in the 5.25pm UK and Ireland time match, while the consistent ball-striking of Kevin Streelman can account for Martin Flores and Retief Goosen in the 4.55pm affair.

The final group of Noren, Palmer and Holmes is scheduled to board the first tee at 6.05pm.