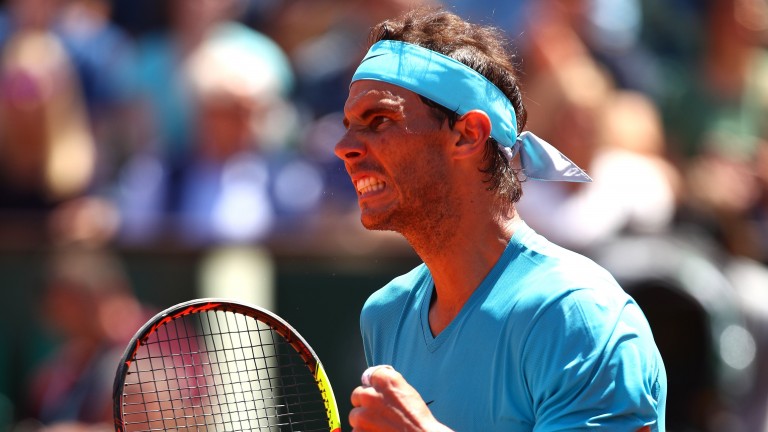 It could be normal service resumed when Rafael Nadal takes on Dominic Thiem in Paris
Clive Brunskill
1 of 1
By Adrian Humphries 8:00PM, JUN 9 2018

Dominic Thiem is sounding bullish as his French Open final clash against ten-time champion Rafael Nadal approaches, but the Austrian could be blown away by the king of clay at Roland Garros.

Thiem has recorded three victories over Nadal, the latest coming in straight sets at altitude in the Madrid Masters last month.

However, Nadal has won all six sets the pair have contested in the Paris Grand Slam and in April he dropped just two games in the course of defeating the Austrian in the Monte-Carlo Masters.

Thunderstorms are forecast for the French capital but Thiem should be more worried about being struck down by his opponent when they are on Philippe Chatrier court.

In their first meeting in Paris in 2014 Nadal won 6-2 6-2 6-3, while in last year's French Open the Majorcan triumphed 6-3 6-4 6-0. Some observers might choose to ignore their first clash as it was so long ago, but in terms of Slam progression little had changed between the pair when they crossed swords on the clay last year.

All of those triumphs came after Nadal's first phase of dominance at Roland Garros and at a time when the Spaniard was either playing himself in for the season (Argentina) or physically vulnerable after making a successful start to the European clay swing (Rome and Madrid).

Nadal, who is bidding to become only the second player in history to win 11 singles titles in one Slam (Margaret Court dominated the Australian Open between 1960-73), was genuinely troubled early on in his quarter-final clash against Diego Schwartz­man and, to a lesser extent, in the opening set against semi-final opponent Juan Martin del Potro.

But Thiem, even though he is one of the best in the world on clay, is far from certain to trouble Nadal the way Schwartzman did.

The 24-year-old Austrian has to believe he can cause problems for the greatest clay-court player in the sport's history, but actually executing his game-plan on the big day could prove more problematic.

Thiem, the first Austrian man to reach a Slam final since Thomas Muster won at Roland Garros in 1995, was fortunate to come through against semi-final upstart Marco Cecchinato in straight sets. Had the Sicilian world number 72 converted one of three points to win the second set, we may have been looking at a different final line-up.

There are obviously slight concerns that winning the French Open is now tougher for Nadal, 32, than it would have been in his mid-twenties. But if anything it may be Thiem who feels the pace on the third Sunday of the tournament after a testing last-four outing and a trio of earlier-round four-set triumphs over Stefanos Tsitsipas, Matteo Berrettini and Kei Nishikori.

Nadal, a straight-sets winner of both of his final clashes with Thiem, in Madrid and Barcelona last season, has lost only twice on the Paris clay – to Robin Soderling in 2009 and Novak Djokovic in 2015.

Nadal, who is hoping to become the first player to nail 11 titles at three different tour-level tourna­ments, did it in style in the first two finals of the trilogy in Monte Carlo and Barcelona. And consider­ing his best-of-five-set record on clay stands at 110 wins in 112 outings – 85 out of 87 at Roland Garros – the final part in Paris may well follow suit.

Punters can back the top seed at 6-5 to claim his 17th Slam crown in straight sets, while Thiem is 11-8 to win at least a set against the great man.

However, preference is for backing the favourite, who has won 16 of the 23 Slam singles finals he has contested in his stellar career, to make light of conceding a start of 5.5 games to his opponent on the handicap.