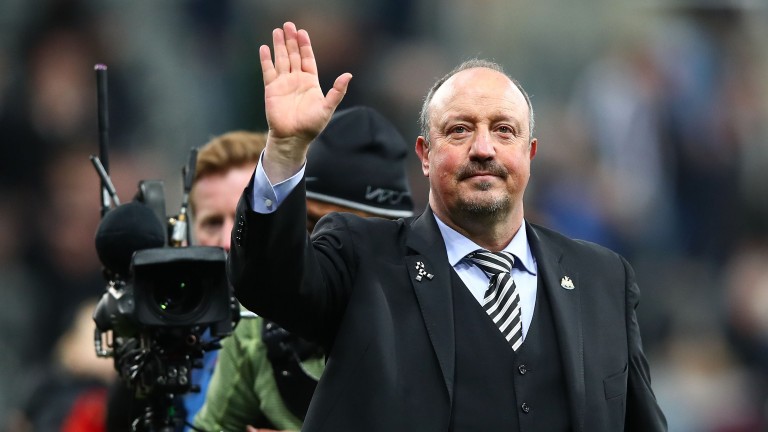 Newcastle have been backed for the drop after Rafa Benitez waved goodbye
Clive Brunskill
1 of 1
By Mark Langdon UPDATED 12:17PM, SEP 6 2019

Newcastle have been relegated twice since Mike Ashley bought the club in 2007 and punters are banking on the hat-trick this season.

The Magpies had been quoted at 6-1 for relegation earlier in the summer, quotes which halved when Rafael Benitez left the club and continued to shorten following the appointment of Steve Bruce to replace the much-admired Spanish boss.

"Newcastle were being backed to finish in the top six when there was talk of a takeover," said Coral's John Hill. "However, that has now switched to them being the most popular relegation bet in the league."

"There's been a huge move on them being relegated considering a ball has not been kicked," added Ladbrokes spokesman Alex Apati and bet365's Steve Freeth said: "We tried to be on the right side of Newcastle's relegation price due to the uncertainty over Benitez’s future, but it has been one-way traffic."

It's unlikely to be Newcastle, but an upset can be foreseen in the top-six and top-four markets with Leicester, Wolves, Everton and West Ham nibbled at by punters opposing drifters Manchester United, Chelsea and Arsenal.

Bookies happy to take on Arsenal

"We are definitely happy to take on Arsenal," said Betfair's Barry Orr. "Leicester have made a few good signings, while Arsenal don't appear to have recruited well enough and lack quality at the back."

Paddy Power's Will Fenwick agrees. He said: "We had Chelsea rated the third-best team in the league last year and their xG numbers reflected that. They will be worse than last year but we don’t think the regression will be as harsh as the market thinks.

"We had Arsenal rated closer to Leicester than Spurs or Chelsea by the end of last season and we don’t expect them to fix their leaky defence."

While punters sniff surprises in the race for the top six and the top four, the usual suspects are being backed in the Golden Boot.

Betfred's Peter Spencer said: "The VAR technology will definitely mean more penalties which has led to us shortening the prices on regular spot-kick takers Harry Kane, Mohamed Salah and Sergio Aguero to be the top Premier League goalscorer."

Liverpool just missed out on landing a major gamble last term despite Salah and Sadio Mane sharing the Golden Boot with Arsenal's Pierre-Emerick Aubameyang, but their army of supporters are back once again.

Ladbrokes report that nearly 50 per cent of all Premier League outright bets have been for the Merseysiders to win a first title since 1990. If only there were a song which had lyrics to commiserate 30 years of hurt.

Leeds could be coming home to the Premier League if the money is right with the Whites subject of a mighty Sky Bet Championship gamble, halving in places from opening quotes once inspirational leader Marcelo Bielsa confirmed that he would remain at Elland Road.

Sky Bet's senior football trader Ivor Davies said: "Leeds are being well backed – they were unlucky last season on all the shot-data metrics that we like, pretty much coming out first in all of them."

"They are easily the best-backed side in the division," added Freeth. "We saw a surge of interest after Bielsa confirmed his Yorkshire stay and, while Pontus Jansson has since gone, the arrival of Helder Costa from Wolves has caught the eye."

Jansson's switch to Brentford was a move away from the usual transfer activity of the Bees, who tend to develop talent rather than buy ready-made Championship performers.

It has gone down well in the betting fraternity with Betway among those to note money for Brentford, although RedZone fear a different capital club.

"Fulham's front players could tear this league apart and we really want to keep them onside," said spokesman Kane Calvin.

League One sees two teams – Sunderland and Peterborough – being backed against the field.

"Sunderland are our biggest ante-post loser in singles outside of the Premier League," said Betway's Alan Alger and Freeth confirmed that the Wearsiders were also top of bet365's liability list.

Sunderland have a history of flopping as favourites

But divisional sponsors Sky Bet are keen to lay the Black Cats, who flopped as favourites last season to finish outside the each-way places in fifth.

"It's the same as last year with Sunderland being well backed but I'm happy to be against them," said Davies.

League Two looks tough and there is a good spread of money around with Bradford the best-backed club with most bookmakers. Northampton have been nibbled at each-way after a squad overhaul while Mansfield and Salford also have their supporters.

"We opened up at 12-1 for Salford which got smashed," said Betfair's Orr. "But they look very short now."

Orr also reported seeing interest for Billericay in the National League South after their outspoken owner Glenn Tamplin was even more bullish than normal on Twitter, but Betfair were more determined to duck Havant & Waterlooville in the same division.

Alger always has an avid eye on the National League and reckons relegated Notts County have to be taken on.

He said: "It looks like a classic wide-open year and County being installed as favourites on the first show has definitely skewed the market. The troubles at Meadow Lane are not certain to be solved quickly and I’d be surprised if they featured at the head of affairs.

"We’ve seen the usual money for Wrexham with punters keeping faith that the longest stay in the division will end at some point, while I can see why Torquay are very popular.

"They are a big loser in our book although the clubs coming straight up from the South and making an impact on the title race are almost non-existent."

Rangers slashed to snatch the Scottish Premiership title from Celtic

Celtic's bid for nine Ladbrokes Scottish Premiership titles in a row could be under threat according to the market moves with Apati saying: "Rangers' heavily active transfer window has seen us slash their outright odds."

Orr reckons the "Neil Lennon factor" is behind the perennial champions' friendless summer and Hill added: "This is the biggest price Celtic have gone off for many years as punters react to Steven Gerrard's transfer business at Ibrox."

If you want a lower-league Scottish double then two teams have been all the rage – Dundee United in the Championship and, particularly, Paul Hartley's Cove Rangers in League Two.

Bookmakers had been expecting the support for United but newly-promoted Rangers opened at 7-1 before being backed into favouritism in their debut campaign.

"Cove have looked impressive in pre-season and we respect the market move," said Calvin.

Manchester City have continually fallen short of Champions League expectations but the favourites have been well supported with Betfred, who reported a £10,000 bet on last season's treble winners sorting out their European form.

Bet365 have an early payout offer in their outright football markets.

Bets placed up to and including September 13 will be settled as a winner if your chosen selection leads by ten points having played the same amount of matches as their rivals (or where opponents who have played fewer fixtures cannot get to within ten points if they win those outstanding games).

Sky Bet are paying four each-way places at a fifth the odds on their sponsored EFL divisions.