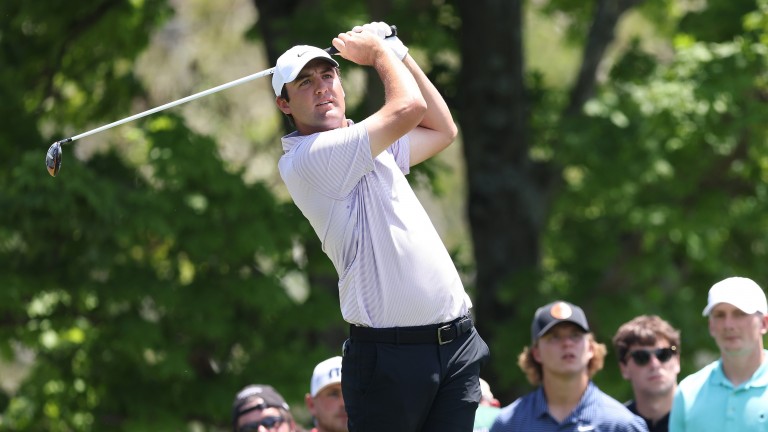 American Scottie Scheffler could be worth monitoring
Andy Lyons
1 of 1
By Joe Casey 8:51AM, JUN 7 2021

An incredibly dramatic Saturday in Dublin, Ohio has blown the Memorial Tournament wide open going into the final day. Jon Rahm, who was six shots clear of his rivals after the third round, was informed as soon as he departed the 18th green that he had tested positive for Covid-19 and would have to withdraw from the tournament.

Rahm started Saturday by making a hole in one at the 16th as he finished off his weather-delayed second round. He continued that strong showing by shooting a third-round 64 to take a comfortable lead over Collin Morikawa and Patrick Cantlay.

After Rahm's withdrawal, Morikawa and Cantlay are tied for the lead on twelve under par, with Branden Grace and Scottie Scheffler three behind on nine under.

After the extraordinary events of Saturday, Morkiawa and Cantlay share the lead and the favourites tag as they are both a best-priced 6-4 to take home the trophy.

Both men have enjoyed recent success at this course, with Cantlay winning this event in 2019 and Morikawa triumphing at last year's one-off Workday Charity Open.

The pair undoubtedly have strong claims, but are short enough in a tournament that is now anybody's for the taking. As a result, at the prices Scottie Scheffler may be a more appealing option than the two at the head of the market.

A double bogey on the 16th on Saturday shuffled Scheffler back down the leaderboard, but he had birdied the three holes before that and is still within striking distance of the leaders.

Scheffler shot the second-lowest round in PGA Tour history last August so has it in him to reel off the birdies and chase down the top two. This would be the 24-year-old’s maiden PGA Tour title but one of his previous professional wins was in Ohio so he clearly enjoys his golf in the Buckeye State.

Scheffler finished eighth in the recent PGA Championship and is in good nick. He shot an opening round of 67 here and if he can replicate that performance he may well go close in a tournament that has been thrown open by Rahm's withdrawal. Five of the last eight events at this course have gone to a playoff, so there could be a close finish in store on the final day.