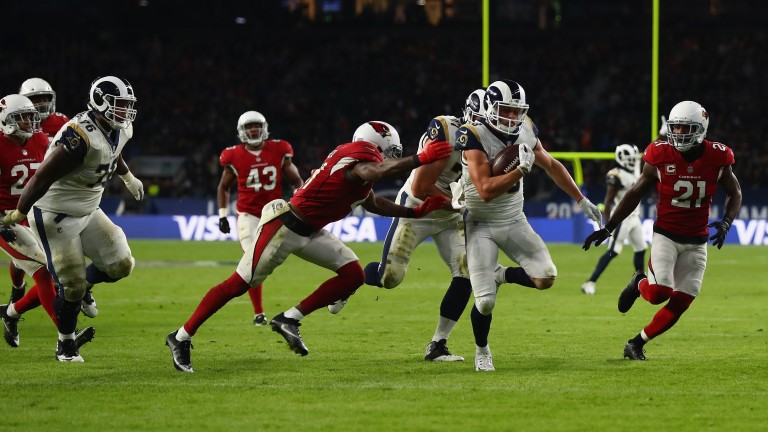 Cooper Kupp of the Los Angeles Rams scores a touchdown against Arizona at Twickenham
Michael Steele/Getty Images
1 of 1
By Phil Agius 2:06PM, NOV 14 2018

A lot of people would like to see the Rams play the Chiefs in the Super Bowl and we should get an entertaining preview of it on Sunday. LA have lost influential wide receiver Cooper Kupp for the season but defensive tackle Aaron Donald will be keen to introduce himself to Pat Mahomes this weekend. The game was due to have been played in Mexico City, but has been switched back to LA due to the poor condition of the pitch at the Azteca Stadium.

The Saints destroyed the Bengals and will be fired-up to add the Super Bowl champions to their growing list of victims this week.

The league's third one-loss team now complete the top three, but they were not at their clinical best against the lowly Cardinals. Another slight setback is that they now have to take on the Rams in their own backyard at the Coliseum rather than a neutral field in Mexico after the change of venue.

The Patriots are out to 13-2 for the Super Bowl after their third loss and they can have no complaints about a sound beating from the Titans. They will hope to have tight end Rob Gronkowski back after their bye and they must also hope that Tom Brady looks like himself again after a break.

The Vikings come back from their mid-season break with a crunch NFC North game against the Bears, who have won four out of five at home.

Contract rebel Le'Veon Bell failed to show before Tuesday's deadline, so he will now missed the rest of the season, but the Steelers can't say they have missed him that much. Their red-hot offence demolished the Panthers while Bell missed another big pay cheque.

You can fairly argue that the Chargers aren't beating much but you can't deny that they are in a winning habit.

Carolina's beatdown by Pittsburgh must have been a shock to the system but they can't be confident about bouncing back against an up-and-down Lions team.

The Super Bowl champions need to show some spirit against the sizzling Saints or they will be dropping out of the top ten. They were booed off by their own fans on Sunday night.

The Ravens are likely to leave it late before deciding if QB Joe Flacco is fit to play after a hip injury. The futures of the veteran quarterback and head coach John Harbaugh with the team are both in doubt.

The Texans will have welcomed their bye as a change to rest weary bones, but they won't have been happy to see Tennessee looming up in the rear-view mirror in the AFC South.

The Packers will be pleased they were able to ease off in the second half of their win over Miami as a long trip to play Seattle on a Thursday night is a big test for anyone.

Oddity of the season - Washington have never trailed in their six wins and never led in their three losses. The first points could be crucial when they face the Texans.

The Titans were good value for their win over the Patriots but Mike Vrabel can't rest on his laurels after beating his old boss Bill Belichick as AFC South rivals Indianapolis also look to have found a good head coach in Franck Reich.

The Falcons drop after being beaten fair and square by the Browns. Defensive injuries are proving hard for them to overcome and this week's clash with Dallas could be vital to their wildcard hopes.

The good news for the Jaguars is that they got star running back Leonard Fournette back against the Colts. The bad news is that their defence looks a shadow of last year's fierce unit and the Steelers are in town this week.

The Bears caught Detroit on the right day and while quarterback Mitchell Trubisky is winning over some critics, there are plenty more still to be convinced by him. The vikings should provide a decent test.

The Broncos need to upset the Chargers to avoid being cut off with the Raiders at the bottom of the AFC West. They need to step up their game in the second half of the season after a mediocre start.

A four-place rise after losing may look odd, but the Seahawks gave our top-ranked team a real scare and covered the double-figure handicap. Plus, they would be fancied to beat the disappointing group they are moving past in the list.

The Bengals were blown away by the Saints and star receiver AJ Green could be missing until December. They brought in fired Browns coach Hue Jackson as special assistant to Marvin Lewis this week, presumably in charge of advising him what not to do.

Miami's ropey road form is costing them the chance to challenge the Patriots. They have lost four out of five away and they travel again when they return at Indianapolis next week.

The Lions had one of their off-days in the Windy City and they will be playing for only pride if they lose to the wounded Panthers.

Things are looking up for the Colts, who have won three in a row and will be right in the mix if they can win their showdown with the Titans.

The Cowboys broke their road duck at an ideal time and in a tough stadium and there are signs that they are making slow but steady progress.

The Browns might not have wanted a break this week after getting a great home result against the Falcons, led by rookie quarterback Baker Mayfield and running back Nick Chubb. Interim head coach Gregg Williams had them looking like a real NFL team.

QB Nick Mullens found his second start tougher than his first but you can't play the Raiders every week. He is set to keep the job even after their bye, though.

Maybe even a six-place drop is not enough for being blown out at home by the bungling Bills, who fielded a QB (Matt Barkley) they had signed on October 31.

The Buccaneers were in the game for a long time against Washington but they have lost six out of seven after opening with two impressive wins.

The Giants are at least trending up as they face a seocnd straight winnable game this week. Odell Beckham scored two TDs against the 49ers and should be in the mood for more.

30 Arizona down one
Record: 2-7
Last week: Lost 26-14 at Kansas City
This week: Four-point favourites at home to Oakland

The Cardinals lost nothing in their defeat at Kansas City with a spirited display and some decent numbers from running back David Johnson will have been a pleasant surprise.

The Bills 'thing' is clearly to deliver a whacking great upset just when everyone has totally written off. Following their out-of-the-blue victory at Minnesota earlier in the season, they produced a 41-10 hammering of the Jets just a week after being smashed 41-9 by the Bears. Quite a turnaround.

The Raiders-Cardinals clash should tell us plenty about whether either side are still targeting wins or have switched their sights to the number one pick in the draft.

FIRST PUBLISHED 2:06PM, NOV 14 2018
Washington have never trailed in their six wins and never led in their three losses