Federer ready to dominate Raonic in bid for revenge 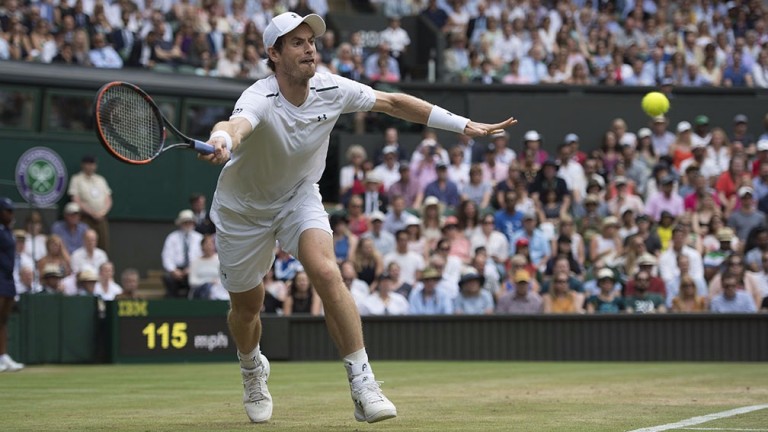 Andy Murray on the stretch in his last-16 battle with Benoit Paire
Ed Whitaker/Racing Post
1 of 1
By Adrian Humphries 7:57PM, JUL 11 2017

Murray v Querrey
When Andy Murray defeated Benoit Paire 7-6 6-4 6-4 at Wimbledon on Monday, many said that would be as far as the hobbling Scot would go in this year's tournament.

But while statements are easy to make and can often be thrown straight away, let's not forget how good Murray, who has been carrying a hip injury sustained before the London Grand Slam started, is at winning even when he's not fully fit.

In fact, no. Murray is not just good at that – he's an absolute master at it.

The two-time All England Club champion, who is seeded top for his second title defence, drifted like mad when news of his hip problem broke.

Despite having collected only one title this year, Murray has not been playing that badly at all – he made the semi-finals of the French Open – but it seems that those who opposed the Scot purely on the basis of injury news will probably be proved right in the coming days.

Next up for the best player Britain has ever produced is a date with Sam Querrey.

The mild-mannered Californian has won only one of nine meetings against Murray – his solitary victory came in his own Los Angeles back-yard in 2020.

But anyone doubting Querrey's wellbeing should know that he did really well to deny Kevin Anderson, who is playing arguably the best tennis of his career, in five sets in the last 16.

So how will the half-limping Murray – there have even been disagreements over whether he is limping or not and I'm in the something-not-quite-right school – deal with the threat posed by Querrey?

How Murray ended up winning in straight sets against Paire is anybody's guess. The mercurial Frenchman could have captured at least two sets but failed to do so, thanks to the champion's dogged actions.

Querrey, who also ended the hopes of Jo-Wilfried Tsonga in round three, is a better all-round player than Paire but Murray has won all six sets he has contested with the American in Slams (all nine if we include their US Open juniors clash in 2004).

That's why Murray's injury is so important in trying to decide whether or not to support the outsider.

Rather than punt Querrey to win at least a set, it could be wiser to support him with a start of 6.5 games. Most firms award him 5.5, but with fitness doubts over Murray it could be worth outsider backers getting another game on their side.

Muller v Cilic
Marin Cilic is happy with the way coach Jonas Bjorkman has helped to lift his game to new heights, but the Croat would do well to respect the threat posed by Rafael Nadal's conqueror Gilles Muller.

Both men are serving at or near the peak of their powers, but it's likely that the younger Cilic, who is 28, will move the ball around as much as possible in order to further tire his 34-year-old opponent, who posted a marathon 6-3 6-4 3-6 4-6 15-13 victory over French Open champion Nadal on Monday.

Bookmakers look to have this match well covered, but for any punter who must have an interest Sky Bet are running set-one score groups and backing the favourites Cilic to win 6-3 or 6-4 at 13-8 and Cilic to win 7-5 or 7-6 at 15-8 can be considered. Even then, Muller is serving well so a return is by no means guaranteed.

Raonic v Federer
Roger Federer was out on his feet when losing to Milos Raonic in last year's semi-finals after fighting back from two sets down to edge out Marin Cilic in the last eight, but it's likely to be a different story this year.

Raonic did well to bring his experience to bear and pip Alexander Zverev in five sets in his latest singles outing, but the Canadian may struggle to hold a candle to the Swiss legend.

Federer posted a blinding result when dismissing Grigor Dimitrov, who had been working his way back to form nicely, 6-4 6-2 6-4 in round four and it could be a similar story against Raonic.

The great man is odds-against to win his fifth match of the tournament in straight sets and that looks worth taking.

Berdych v Djokovic
Tomas Berdych posted his best victory – one of only two in 27 previous matches – over Novak Djokovic at Wimbledon in 2010, the year the Czech went on to reach his only Grand Slam final.

Some observers reckon he may be playing well enough to achieve a third win over the Serb, but punters who have placed faith in Berdych down the years have had their fingers burned.

Djokovic is bidding to get back on track after losing his mojo since his 2016 French Open win, and he has employed Andre Agassi to help him rediscover direction in his stellar career.

With question marks over Djokovic's form and Berdych happy with his game, it could pay to have an interest on the clash lasting for more than three sets. Berdych looks a little short at 4-7 to win at least a set, but it's difficult to quibble with odds of 5-6 about the match going to a fourth or fifth set.