Quarter-final aces are expected to pound the lipstick

Anderson likely to win but prices look on skinny side 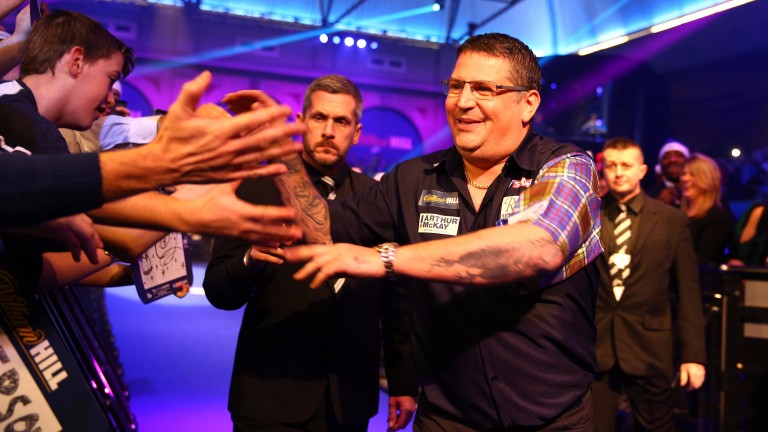 Dave Chisnall could find Gary Anderson (above) a tough opponent to stop
Alex Pantling
1 of 1
By Steve Palmer 8:17PM, DEC 29 2016

Dave Chisnall booked his spot in the quarter-finals of the William Hill World Championship with a 4-2 victory over Jelle Klaasen on Thursday, but the manner of victory was unconvincing and defending champion Gary Anderson will not be quaking in his boots.

Chisnall is one of the most prolific 180-hitters on the circuit and he provided his standard plethora of maximums against Klaasen, but the Englishman’s lack of killer instinct at the end of legs was again on display as he fell over the line.

A better class of player than Klaasen would almost certainly have taken advantage of Chisnall’s wobble. Klaasen burst into life in short, spectacular spurts, but seemed strangely lacking in focus for much of the match, failing to score heavily enough to keep pace.

Anderson is a tougher task for Chisnall and the Scot is growing in confidence after a bright start to the competition. Before launching his first tungsten at Alexandra Palace, there were serious question marks over the head of Anderson, who had just made the switch to wearing glasses.

The spectacles were getting in the way of Anderson’s natural throwing action – the dart clipping the bins – forcing the 46-year-old to alter his technique slightly. Pre-tournament practice has clearly paid off, though, with the champion averaging 102.58 and 107.68 in the previous two rounds.

Anderson has lost only two sets in his three matches at Ally Pally, a stage on which he has not been defeated since being edged out 4-3 by Michael van Gerwen in the third round in December 2013. The Flying Scotsman is chasing three PDC titles in a row, something achieved by only Phil Taylor.

An Anderson victory against Chisnall seems likely, but only high-rollers can make serious profit from the skinny prices on offer. Punters with less ammunition are advised to get involved in the 180s markets. Both players make maximums with ease and the lipstick should take a pounding.

Even if Anderson justifies favouritism with the absolute minimum of fuss and only five of the possible nine sets are needed, there should still be a feast of 180s.