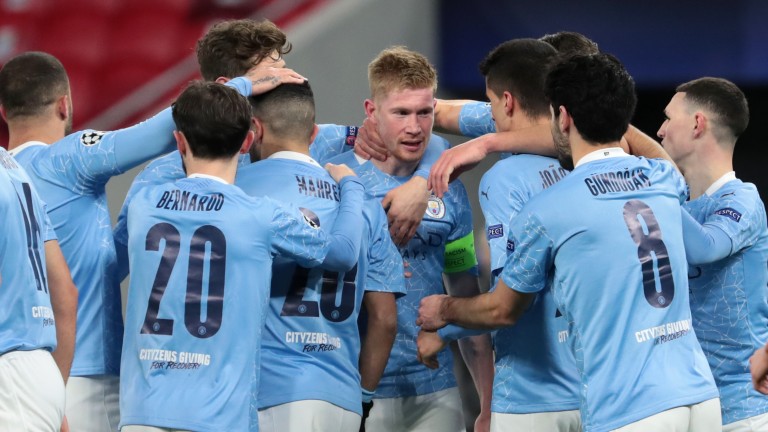 Manchester City are still in the hunt for four trophies this season
Miklos Szabo
1 of 1
By James Milton 2:35PM, MAR 19 2021

Manchester City eased through to the Champions League quarter-finals this week but tougher tests await the quadruple-chasing Citizens after Friday's draw.

City beat Borussia Monchengladbach 4-0 on aggregate in the last 16 and they take on another Bundesliga side, Borussia Dortmund, in the last eight.

If they see off BVB then they will face a blockbuster semi-final against either Bayern Munich or Paris St-Germain, whose last-eight tie is a repeat of the 2019-20 final.

Before Tuesday's second leg against Gladbach, Pep Guardiola dismissed talk of a clean sweep of trophies, saying: "Four titles is a utopia. It never happened before and I think it's never going to happen."

Bookmakers disagree, however, and Coral go 8-1 that City win the Premier League, Champions League, FA Cup and EFL Cup, having offered 100-1 at the start of the season.

City travel to Everton on Saturday in the FA Cup quarter-finals. They have a 14-point lead in the Premier League and are 1-3 to win next month's EFL Cup final against Tottenham.

Pep's men are 9-4 favourites for the Champions League ahead of holders Bayern at 4-1. However, the big market movers after Friday's draw were Chelsea, who face outsiders Porto in the quarter-finals before a potential semi against Real Madrid or Liverpool.

Thomas Tuchel's Blues knocked out Atletico Madrid in the last 16 and are 5-1 third-favourites for the trophy, from 20-1 at the start of the knockout stages.

Liverpool are narrow favourites at 4-5 to qualify from their quarter-final tie against Real and the Reds, European champions in 2019, are 6-1 to regain the trophy. Hills slashed the odds on a Premier League club winning the tournament from 11-10 to 8-15 after the draw and an all-English final is 13-8 with Coral.

English clubs also dominate the Europa League betting with Manchester United 7-4 favourites ahead of Arsenal at 3-1. It is 6-1 bar the front two in the market.

United take on Granada in the last eight while the Gunners face Slavia Prague, who have disposed of Leicester and Rangers in the first two knockout rounds.

The Premier League pair are in opposite halves of the draw and Coral offer 2-1 that they meet in the final. The Red Devils would face either Ajax or Roma in the semis and Villarreal or Dinamo Zagreb stand in Arsenal's path if they get past Slavia.

Dinamo were shock winners over Tottenham on Thursday night, winning 3-0 in extra-time in Croatia to seal a remarkable 3-2 aggregate win.

Spurs boss Jose Mourinho, whose side suffered a 2-1 derby defeat to Arsenal in the Premier League last weekend, is Coral's 6-4 favourite to be the next top-flight manager to leave his position. He is evens to depart before Tottenham's final league game of the season.