Qarabag star could give Chelsea plenty to think about

Michel can make his mark in Baku 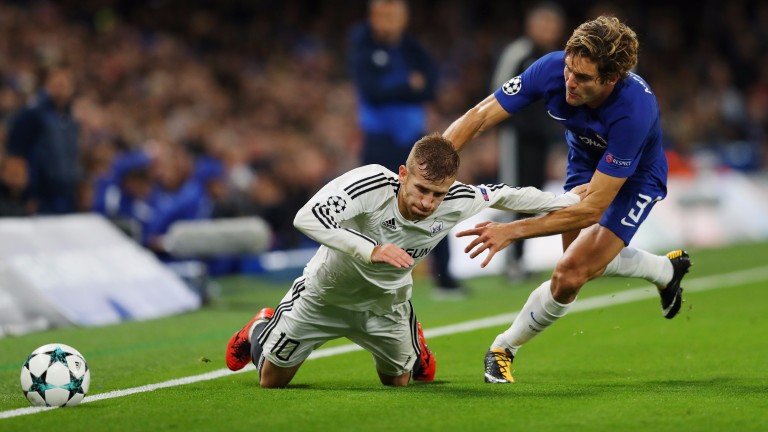 Chelsea brushed aside Qarabag with ease in September
Richard Heathcote
1 of 1
By Steve Davies 7:00PM, NOV 21 2017

Antonio Conte can moan all he likes about Chelsea’s ‘abnormal’ fixture schedule but the Italian has only himself - and his team - to blame for his current predicament.

This trip to Baku, the halfway point of a 5,000-mile round trip and the furthest the Blues have been for a competitive game, would have been rendered largely meaningless had Chelsea not messed up in Roma last time.

That 3-0 loss means he’s had to take a full squad to Azerbaijan and most of the players picked tonight will be in action at Liverpool on Saturday.

Chelsea, who battered Qarabag 6-0 when the Azeris visited Stamford Bridge on matchday one, should still be too strong for Gurban Gurbanov’s men and are priced accordingly.

But it won’t be lost on Conte that the Azeri champs go into the game having recorded a pair of draws with Atletico Madrid and they find themselves still in contention for a Europa League spot. And they’d have taken that when the draw for Group C was made a couple of months ago.

It’s true they were utterly outplayed in Madrid, where the shot count was 34-4. But there had been little to choose between the teams in Baku two weeks earlier and the Horsemen are quite capable of unseating anyone.

Qarabag seem far more at home in such lofty company having had a few run-outs at this level so they are unlikely to be blown away on a windy night at the Olympic Stadium.

Conte will send out a strong side and they should get the win that guarantees their place in the last 16.

Their last three Premier League games have been won to nil and it’s evens they can beat Qarabag with a clean sheet for the second time. The Chelsea-Chelsea double result at evens is also likely to be a popular punt.

Saturday’s 4-0 romp at West Brom, hot on the heels of beating Manchester United 1-0, has lifted spirits after a tricky spell and Conte’s big players are producing big performances more consistently.

Having said all that, Qarabag do carry a threat – they carved out chances at home to both Roma and Atletico – and have lost just one of five home Champions League ties this term.

Birmingham fans may vaguely remember Michel, who is Qarabag’s playmaker and definitely overpriced at 33-1 to score first. He notched against Atletico and looked a threat on the ball.

Key stat
Qarabag have lost just once at home in all competitions since February.