Pujara could put on a runscoring masterclass for India in Mumbai 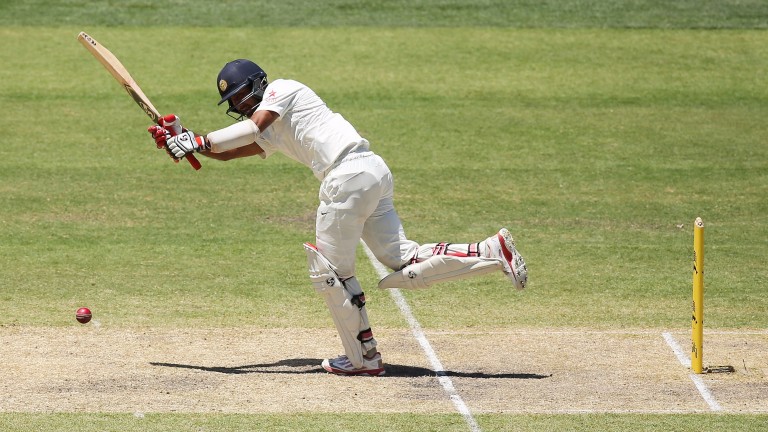 England have won their last two Test matches in Mumbai but they are big outsiders to complete the hat-trick against impressive India at the Wankhede Stadium.

In Mohali, India took a 2-0 lead in the five-match contest and England face a tough task to prevent the hosts clinching the series.
Alastair Cook won the toss in the third Test but his side were unable to convert that significant advantage into a win.

The same three players tormented England with the ball and fast bowlers Umesh Yadav and Mohammed Shami also struck key blows on the way to an eight-wicket win for India.

It was an excellent all-round display from Virat Kohli’s improving side and England had plenty to ponder in their period of rest and recuperation in Dubai.

If they are to overcome hot favourites India then they will have to do so with yet another reshuffled batting order.

Just when it looked as though Cook had finally found a solid opening partner, Haseeb Hameed was ruled out of the series with a broken finger.

The uncapped Keaton Jennings has been called up but Hameed’s departure is a blow given the courage, composure and class shown by the Lancashire teenager.

Jos Buttler’s recall in Mohali as a specialist batsman was a qualified success – his patient 43 was the second-highest score of England’s first innings – but the visitors failed to reach 300 in any of their last four innings.

India’s batting is far more secure with captain Kohli in superb touch and the all-rounders chipping in with valuable runs.
Cheteshwar Pujara is a man for punters to keep onside at the Wankhede Stadium, where he has scored first-innings centuries in both of his Test appearances.

The number three has been in sparkling form during this series, with first-innings scores of 124, 119 and 51, and he has been on a prolific run for some time.

He relishes the responsibility of putting runs on the board early in the match, with a first-innings average of more than 56, and should be backed to lead the way for the hosts this week.

Ashwin also has an enviable Test record at the Wankhede and the influential all-rounder looks a worthy favourite to be named man of the match.

In three Mumbai Test matches, Ashwin has scored 226 runs and taken 18 wickets and his figures in this series are stacking up well.
As well as first-innings scores of 70, 58 and 72, he has taken 15 wickets in the series and should enjoy more success this week.

Like Pujara and Ashwin, England’s Ben Stokes has excelled in his team’s first innings, scoring 128 in Rajkot and 70 in the second Test at Visakhapatnam.

He began the rebuilding job in Mohali, hitting five fours in an innings of 29 before being stumped tamely off Jadeja.

That disappointing dismissal could inspire more batting heroics from the fiery Durham man and Ladbrokes’ first-innings runs line of 25.5 is well within his scope.

Punters' guide to Mumbai
Tourists bidding for a hat-trick

India lifted the World Cup at the Wankhede Stadium in 2011 but their Test record at the Mumbai venue is less than glorious.

They have won only three of the eight Wankhede Tests this century, including a 13-run victory over Australia on a sub-standard pitch in November 2004.

Four of those matches ended in defeat for the hosts with England winning in Mumbai in 2006 and 2012.

Alastair Cook (122) and a brilliant innings of 186 from Kevin Pietersen laid the foundations in 2012 as spinners Graeme Swann and Monty Panesar shared 19 wickets in the match.

Spin also dominated the last Test at the venue with Ravichandran Ashwin and Pragyan Ojha bowling out the West Indies for 182 and 187 but quicker bowlers Ian Botham, Richard Hadlee and Courtney Walsh enjoyed success in Mumbai in the 1980s and 1990s.

Weather forecast: sunny and dry for all five days, 32 to 34C.